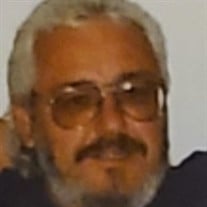 Clyde Theodore Trusty passed away at home from natural causes on June 22, 2021. Clyde was born on June 13, 1946 in Dunsmuir, California. Preceded in death by father Francis, mother Nina Lenore Reid, sister Diane and wife Carole. Clyde was survived by his older sister Margaret, his younger brother Jeff (Sherry) and his four sons, Chris (Veleen), Chad (Sharon), Kevin (Karen), and Shaun (Elizabeth) and best friend, Buddy II. Clyde was also survived by 16 grandkids, and 3 great-grandkids. Although born in California, Clyde grew up in Salt Lake City, living in the Avenues on “Q” Street. Clyde graduated from East high school, and married Nancy Carpenter, whom he later divorced, re-married, and re-divorced. Although unable to stay together, Clyde and Nancy had four boys, none of which have served any substantial jail time, so they must have done something right. Later in life Clyde met and married Carole and spent many happy years together with her enjoying being grandparents until her death in 2014. Clyde entered the Marine Corps as a rifleman in 1965 and served one tour in Vietnam where he was severely wounded in May of 1967. After recovering aboard a medical ship, Clyde eventually returned stateside. Clyde received an honorable discharge in September of 1968 and completed military service while earning a National Defense Service Medal, Combat Action Ribbon, Vietnam Services Medal, Vietnam Campaign Medal w/ device, Presidential Unit Citation, Good Conduct Medal, and a Purple Heart. Clyde was a patriot and loved his country and was proud of having served his country as a Marine. His house was decorated with Marine Corps memorabilia, plates, flags, and statutes. Clyde was a loving father and grandfather, but PTSD consumed him along with other ailments as a result of his service. Ultimately those ailments made it harder for him to spend quality time with his family, and Clyde had a hard time going out in his final days. Although he couldn’t get out much, he still enjoyed looking at pictures of his grandchildren and remembering their special times together. Clyde will be laid to rest at 12:00 Friday, July 2, 2021 at Utah Veterans Cemetery and Memorial Park in Bluffdale, Utah. Prior to the graveside service, there will be a viewing at Serenity Funeral Home located at 13863 S 2700 W Bluffdale, Utah. In lieu of flowers, the family asks for a small donation to any worthy charity that supports Veterans affairs Semper Fi Clyde!

The family of Clyde Theodore Trusty created this Life Tributes page to make it easy to share your memories.

Clyde Theodore Trusty passed away at home from natural causes...