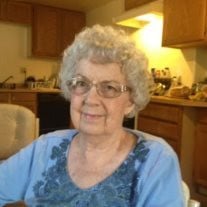 Colleen Kay Clyde Andersson, age 78, passed away on February 8, 2014 in Murray, Utah from causes related to cancer. She was born March 10, 1935 to James Reese Clyde and Alta Law Clyde. She married Walter L. Hoggan in the Mesa Arizona Temple on January 27, 1955. They later divorced. She married Hilmer Andersson in December of 1974. They later divorced. Colleen grew up in Montana and moved to Southern California as a young adult where she lived until 1970 when she moved to Spanish Fork, Utah. The remaining years of her life she lived in multiple cities along the Wasatch Front. She graduated from Hamilton High School in Montana and went on to accomplish several skills through attending Trade/Technical schools. She worked as a data entry clerk, secretary, nurses aid, substitute teacher and most recently as a product demonstrator; her favorite because of the opportunities to socialize. A member of the LDS church, Colleen served in many roles throughout her life. Her children and grandchildren were her greatest happiness. Colleen grew up around many animals and as a result had a great love for them with countless pets throughout her life. Her children learned from her to love, cherish and care for animals. They recall with fondness her allowing them to have just about any pet they ever asked for. Colleen is survived by two sisters, Norma Martin and Evelyn Laing as well as one brother, Arthur Clyde, her first husband, Walter Hoggan, son Charles Hoggan, daughter, Ronelle (Hoggan) Patten, daughter, Eileen (Hoggan) Cleveland, and son, Randall Hoggan – 11 grandchildren and 3 great grandchildren. Colleen is preceded in death by her parents, two sons, Edward and Gary, brothers, James, Hugh, Clarence, Jerald, Ralph, Grant and Kenneth, sisters, Ruth, Leah and Mae. Services will be held on Thursday, February 13, 2014 at the Lincoln Heights LDS Chapel on 601 East Mansfield Avenue (3115 South) in Salt Lake City at 12:00 noon with a viewing beginning one hour prior at 11:00 a.m. Interment will be at the Evergreen cemetery 1997 South 400 East in Springville, Utah at 3:00 p.m. Colleen’s family wishes to thank Encompass Home Health and Hospice, Huntsman Cancer Institute, Rocky Mtn. Care Center and Serenity Care for their kind and gracious care at this difficult time. Please share memories and condolences at www.serenicarefuneralhome.com

The family of Colleen Kay Andersson created this Life Tributes page to make it easy to share your memories.