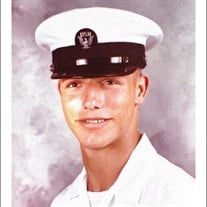 Coray Scott Williams, dearly loved father and grandpa, was born on 5-21-1956 to Glen Duane and Carol Clayton Williams in SLC, Utah. Coray passed away and was called back home 9-02-2020 after battling with health problems & liver cancer. Coray fought a long difficult battle and will now be a guardian angel guiding his two daughters and grandchildren. Coray married his sweetheart Joni Anderson on June 12, 1981. They were later sealed in the Jordan River Temple in September 1983. They were blessed with two beautiful daughters Cortney & Kayla through the wonderful process of adoption. They were later divorced but remained best friends. His family is at peace knowing he is now free from his suffering and pain. We know he is enjoying a happy reunion with his parents and brothers Glen Bradley & Kurt, along with his precious niece and nephews. Coray had a wonderful sense of humor and loved to tease. He was so fun to be around, loved to talk, and had many friends. His favorite things to do were water-skiing, boating, racquetball, football, hiking and mountain biking. He had a great love for animals, especially each of his dogs. Coray served his country and was a veteran of the US Navy. Coray will be greatly missed by all who knew him. He is survived by his daughters Cortney Williams, Salt Lake City, Utah and Kayla Thomas (Landon) Bluebell, Utah, along with his precious grandkids Alize, Oaklee and Carter; as well as siblings Joan Lloyd (Clair) Sandy, Utah, Peggy Jacobson (Rod) Montpelier, Idaho, and Leslie Williams, Salt Lake City, Utah and extended family and friends. A memorial tribute will be held September 12 from 1 pm - 3 pm. At River Ridge Stake Pavilion 10168 S 1100 W (enter off 1000 W) South Jordan, Utah. Come share memories with family & friends and share condolences to family. Coray's Cremated Remains are now buried at Utah Veterans Memorial Park (Camp Williams) in Bluffdale Utah.

The family of Coray Scott Williams created this Life Tributes page to make it easy to share your memories.