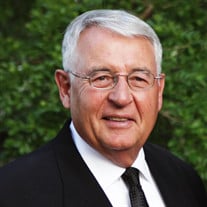 Craig Griffin Anderson, age 75, passed away peacefully in his home in Cottonwood Heights, Utah on February 22, 2021, following a short battle with stage four Glioblastoma. He was born on January 28, 1946 in Logan, Utah to Sarah Maud Griffin and Michael Mariner “Luke” Anderson. Craig was married to his high school sweetheart, Kathryn Jensen Anderson for 52 years. They were married in the Logan Utah Temple on March 18, 1968. Craig served his country honorably, receiving his commission in the Air Force right out of college and retiring from military service with the Utah Air National Guard after 28 years of service. He was a navigator and flew many missions as a crew member in the KC-135 refueling aircraft. He served in Viet Nam, Operation Desert Storm and Operation Allied Force during his active duty years. Craig was a devoted husband to his wife Kathy, a loving father and grandfather, and an active member of the Church of Jesus Christ of Latter-Day Saints where he served faithfully as Bishop and in many other callings working with the youth, scouts, and Elders quorum to name a few. Following his retirement, Craig and Kathy served in the Hispanic Initiative in the inner city project outside downtown Salt Lake, two education missions in Guangzhou, China and a Military Affairs mission in the Rome, Italy Mission. Craig truly enjoyed traveling, whether it was as part of an aircrew, trips all over the world with his wife Kathy, or vacations with his children and grand-children, he made the most of every opportunity to immerse himself in the places he visited. Taking countless pictures and documenting his adventures brought so much joy to his life. Craig was very competitive and picked up sports, games, really any activity he was presented very seriously and usually came out a winner! He was the best at assigning nicknames to anyone and anything without coming across as offensive. He had a true gift of words. He could strike up conversations and made fast friendships with anyone, be it on a plane, with a random stranger while visiting a foreign country, or waiting in line at the grocery store or amusement park. He was truly remarkable with an ability to connect with so many people. Those who had the privilege of knowing him truly loved him! Craig was always quick to volunteer to help or provide service to anyone in need without question. He was an example to all who knew him. Craig is survived by his brothers, Milton Anderson (Dianne - deceased) and Tom Anderson (Anne) and his sister Sarah Bozich (Craig), his wife Kathy, daughter Kaci (Bill Okland, Mesa, AZ), son Mike (Jessica, Colorado Springs, CO), daughter Ashley (Jeff Clark, Newport Beach, CA), son Garrett (Cindi, Draper, UT) and his twelve grandchildren, Karli (Terrel), Rex, Olivia, Griffin, Ella, Taegan, Marley, Cade, Carter, Hudson, Charlie & Reed. Craig is preceded in death by his parents, Sarah Griffin & “Luke” Anderson and older sister, Paulene Berge. Funeral Services are Monday, March 8th, 2021 at 11 am at the LDS Chapel located at 8169 S. Top of the World Dr., Cottonwood Heights, UT 84121. Services will be streamed on-line at https://www.youtube.com/channel/UCUo0IS6sE69vpvnqvZah2Vg/videos. Graveside service and interment at Utah Veterans Cemetery and Memorial Park at Camp Williams. 17111 S. 1700 W., Bluffdale, UT 84065 In lieu of flowers please consider making a donation to: www.AZBrainfood.org where Craig served as a volunteer every Thursday the past few years of his life.

Craig Griffin Anderson, age 75, passed away peacefully in his home in Cottonwood Heights, Utah on February 22, 2021, following a short battle with stage four Glioblastoma. He was born on January 28, 1946 in Logan, Utah to Sarah Maud Griffin... View Obituary & Service Information

The family of Craig Griffin Anderson created this Life Tributes page to make it easy to share your memories.

Craig Griffin Anderson, age 75, passed away peacefully in his...