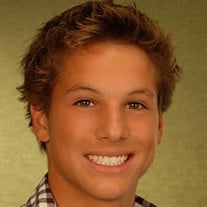 Curtis Reed "Parker" Fellows, our beloved son and brother, passed away suddenly Saturday, April 8, 2017. Curtis was born on July 5, 1996 to Robert Reed and Loisann Smith Fellows in Sandy, Utah. Curtis graduated with honors from Alta High School where he excelled in both academics and sports. During his time as captain of his club soccer team, Curtis was the biggest and most vocal supporter of each player. No one who knew Curtis could ever doubt the genuine love and kindness that lived in his heart every day. He was a strong advocate for the underdog and was keenly sensitive to those in need. His family cannot remember a single negative word he ever spoke about anyone. Curtis loved his friends and had many of them. His friends, which included just about everyone he ever met, knew him for his infectious positive outlook and passion for life, as well as his love for deep and genuine conversation. His family, especially his little nieces and nephews, held the biggest part of his heart. He was an active member of the LDS Church and dearly loved working with the missionaries. His greatest desire was to serve a mission and lift others. Curtis is survived by his parents, brothers—Steven and Mark, sister and brother-in-law—Katie and Corby Hodgkiss, nieces and nephews—Callie and Clark Fellows, and Jade, Nixon, Scotti and Covey Hodgkiss, and grandparents—Barbara Fernley, Glenda Smith Williams and John Ebbinghaus, as well as his many aunts, uncles and cousins. Curtis was preceded in death by his grandparents - Alfred L. Fellows, Marilyn R. Ebbinghaus, Earl Jay Smith and S. Edgar Fernley. Services will be held at the LDS meeting house located at 1187 E Draper Pkwy in Draper, UT. Viewings will be held on Thursday, April 13 from 6-8pm and on Friday, April 14 from 9-10:30am. Funeral service will be held at the same location at 11am. Interment will take place at Memorial Mountain View Cemetery - 3115 Bengal Blvd, Cottonwood Heights, UT 84121. At peoples request we have sent up a donation account with Venmo at the username @curtismemorialfund. We believe the greatest gift we can offer Curtis is to incorporate the love and care he had for others into our lives.

The family of Curtis Reed "Parker" Fellows created this Life Tributes page to make it easy to share your memories.