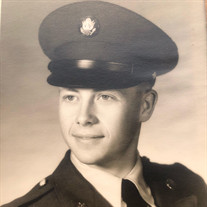 Dale Carter Bowthorpe, age 78, passed away at his home on August 6, 2021 from a stroke. Dale was born August 18, 1942 to Reed Andrus Bowthorpe and Mable Lillian Carter Bowthorpe. He grew up in Holladay and graduated from Olympus High School. Dale attended the U of U and BYU majoring in Industrial Education. He could and would repair anything, whether we wanted him to or not. Dale served his country by joining the Army and was activated during the Berlin Crisis. He became a Mess Sergeant preparing meals for the officers. He met his future wife, Judy Gay Sjoblom, on a blind date at church. They were married July 2, 1965. Their marriage was solemnized in the Salt Lake Temple of The Church of Jesus Christ of Latter-day Saints. Dale was an artisan in several mediums: arrowhead mosaics, sandstone carvings, and Silversmith jewelry. He has pieces in Jackson Hole, Santa Fe, Albuquerque, and Chicago. As well as a sandstone carving of Delicate Arch in the Utah Governor’s Mansion. Dale was a successful businessman owning Alta Schwinn Cyclery in Sandy along with his son, Aaron. Hunting and fishing were a big part of his life. He loved to Salmon fish in Idaho and in 2008, after living in Utah County for 43 years, he moved his family to Idaho to be closer to the rivers he loved. With his health failing, he and his family moved back to Utah in 2020. Dale was an active member of the Church of Jesus Christ of Latter-day Saints serving in the High Priest Group Leadership, YSA Leadership, Primary Teacher, Scout Master, Webelos Sunday School Teacher and in the Sunday School Presidency. He loved taking his Webelos Snipe hunting and when they didn’t find any Snipes, he’d bring them back to his home for a delicious dutch oven pheasant dinner. Dale is survived by his wife, Judy, his son, Aaron R. Bowthorpe, his grandchildren, Mehrik Lillian Bowthorpe and Max Carter Bowthorpe. He is also survived by his sisters, Kaye Bowthorpe, Holladay, Debra (Dwayne) Pendleton, Cottonwood Heights, sisters-in-law Annette Peay (Dennis R.) Bowthorpe, Heber City, Becky Sjoblom (J.R.) Smith, American Fork, Brenda Carroll (Boyd E.) Sjoblom, Highland, brother and sister-in-law Mike and Paula (Sjoblom) Bowthorpe, Sandy and brother-in-law Lester W. Moore (Margene Sjoblom), Draper. Many nieces, nephews and cousins survive him. He was preceded in death by his parents, brother, Dennis R. Bowthorpe, sister-in-law Margene Sjoblom Moore, brother-in-law Boyd E. Sjoblom. Dale’s family would like to thank his Hospice Angels: Jenn, Arla, Rachel, Denise and Amber for their kind and compassionate care of Dale. At Dale’s request, there will be no services.

Dale Carter Bowthorpe, age 78, passed away at his home on August 6, 2021 from a stroke. Dale was born August 18, 1942 to Reed Andrus Bowthorpe and Mable Lillian Carter Bowthorpe. He grew up in Holladay and graduated from Olympus High School.... View Obituary & Service Information

The family of Dale Carter Bowthorpe created this Life Tributes page to make it easy to share your memories.

Dale Carter Bowthorpe, age 78, passed away at his home on August...