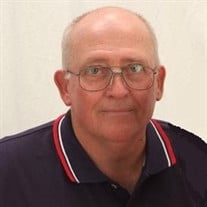 Dale L. Hancock, 65, finished his earthly work and returned to his loving Heavenly Father in the early morning hours of October 13, 2015 after a short and valiant battle with cancer. Dale was born November 21, 1949 in Payson, Utah to Leo John and Della (Larsen) Hancock. From a young age, Dale developed a love for the Boy Scouts of America and scouting became a large part of his life. He was an active participant in the Order of the Arrow Brotherhood and earned the Arrow of Light, Duty to God and Eagle Scout Awards. He developed a deep-seated commitment to fulfilling his duties to God and his country which led him to serve a full time mission for the LDS church and to enlist in the military. Dale received his mission call December 3, 1968 to serve in the Italian Mission. After completing an honorable two year mission he returned home to attend the University of Utah where he became a devoted Ute fan. He served in the Utah National Guard with Battery C 1/140th Field Artillery Unit in Spanish Fork, UT. He married Patsy Faye Wren of Aberdeen, Idaho January 26, 1973 in the Salt Lake Temple. Dale and Patsy made their home in Payson, Utah where they welcomed three boys; all three of which became Eagle Scouts. Dale retired from the Utah Department of Corrections after working 20 years as a corrections officer. He also worked 8 years at the Utah State Hospital in Provo, UT as a security guard. He served the LDS 11th ward faithfully as a scout leader, Sunday school teacher, member of the bishopric and the sunbeam teacher. Dale was loyal. He was a devoted father, husband, grandfather, brother, friend, and co-worker. He was an avid reader who shared his love for reading with his children and grandchildren. He loved to fish and for years he consistently took his boys fishing every Saturday morning at 7am. Until the day he passed he and Patsy went to dinner every month with his brother, sisters and their spouses. Family was important to Dale. He enjoyed spending time with his grandkids and taught them how to cook, fish, garden, be kind and love unconditionally. He is survived by his eternal companion: Patsy; Brother: Lars (Sarah) Hancock of Payson; Sisters: Susan (Pete) Schirmer of Payson and Jane (George) Jakeman of Orem; and his three sons: Nathan (Aleasha) Hancock of Santaquin, Tyler (Mellisa) Hancock of Mona and Jeremy (Sydnee) Hancock currently in Las Vegas. He is preceded in death by his father and mother. Services will be held Saturday, October 17th at 11:00 am at the Payson Utah 11th Ward Chapel, 400 North 900 West. A viewing will be held at that same location Friday, October 16th from 6-8 pm and again Saturday morning from 10:00 -10:45 am. In lieu of flowers please take a family member fishing (preferably with flies or a spinner, Dale hated Powerbait). Send condolences to the family at www.serenityfhs.com

Dale L. Hancock, 65, finished his earthly work and returned to his loving Heavenly Father in the early morning hours of October 13, 2015 after a short and valiant battle with cancer. Dale was born November 21, 1949 in Payson, Utah to Leo John... View Obituary & Service Information

The family of Dale L. Hancock created this Life Tributes page to make it easy to share your memories.

Dale L. Hancock, 65, finished his earthly work and returned to...