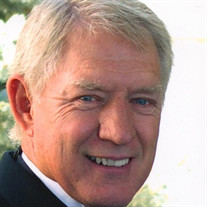 Our Beloved Husband, Father, Grandfather, Brother and friend passed away peacefully August 17, 2016 at home. Parents are Dale T. and Fern King Herring. He was the 4th of 15 children. Raised in Provo, He graduated from Provo High School. Earned his Eagle Scout award. He was a Vietnam Veteran and served as a LDS Stake Missionary while stationed in Saigon. He received an Associate’s degree from Utah Technical College. He worked with his Father in Heating and Air Conditioning until his Father retired and he continued the business successfully as Economy Service for 36 years. He married Debra Spendlove and was sealed in the Mt Timpanogos Temple. They raised their family in West Provo. He served faithfully in various church callings. He loved hunting, camping, Four wheeling, fishing, desert trips, all with his family. He also loved his garden and flowers. He is survived by his wife, Debra Herring, and 5 children, Dale Ty (Angel) Herring, Danny Christian Herring, David Kyle (Michelle) Herring, Debilynn Herring (Wyatt) Nebeker, Don Ryan (Sadie) Herring. He loved his family very much and had a special bond with each of his 16 grandchildren and 7 Great grandchildren. He is proceeded in death by son Dallen Ward Herring, Father Dale T. and Mother Fern King Herring, Sisters Irene Herring Lamb and Darla Herring Wilkinson. Services and viewing will be held at the Provo West Stake 2530 West 200 South Provo, UT. Viewing Monday Aug 22, 7:00 p.m. to 8:30 p.m. Tuesday Aug 23, 9:00 a.m. to 10:30 am prior to services. Funeral at 11:00 a.m. Interment will be at East Lawn Cemetery 650 East 4800 North Provo, UT. We would like to thank Dr. Todd Cook and his staff for their love and care. Also, Hearts for Hospice for their many hours of Service www.serenityfhs.com

Our Beloved Husband, Father, Grandfather, Brother and friend passed away peacefully August 17, 2016 at home. Parents are Dale T. and Fern King Herring. He was the 4th of 15 children. Raised in Provo, He graduated from Provo High School. Earned... View Obituary & Service Information

The family of Dale Tim Herring created this Life Tributes page to make it easy to share your memories.