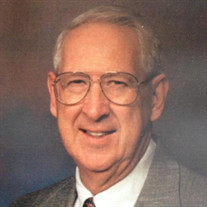 Dale returned to his Heavenly eternal home the first day of this new year, 1 January 2015, peacefully in his sleep of natural causes. He was born June 20, 1930 to Vasco and Alta Lealette Laub, and was brother to twins, Marvin and Melvin Laub, both whom survive him. He was raised in Ogden and Salt Lake City, Utah and graduated from South High School. Dale graduated from BYU with a BS and Masters Degree and from the University of Utah with his PHD. He especially enjoyed teaching and serving in School Administration in Provo and Granite School Districts. He served active duty as a navigator in the US Air Force and for the Air Force Reserves and retired as a full Colonel in 1990. Many years were spent as the Utah Liason Officer Coordinator for the Air Force Academy. In 1963 he married his Canadian sweetheart Joan McArthur in the Salt Lake Temple. They were wonderful and devoted parents to Jennifer (Davidson), Rebecca (Southern), Darren Laub and foster son, Gary John. He and Joan were grandparents to 14 grandchildren and 3 great-grandchildren. Dale was an active member of the LDS Church and served a full-time mission to the North Central States, and with his wife in the Georgia, Atlanta mission. He felt blessed throughout his lifetime to serve in many church assignments, including Bishop and Temple Worker. Dale was recognized with over 60 years of service to the Boy Scouts of America and received the Silver Beaver Award in recognition of his time. He will be remembered for his faithful service and strong testimony of the Gospel of Jesus Christ. He loved to travel and had been to all of the lower 48 states and Hawaii, as well as many years in Japan and throughout Asia. He lived in California, Salt Lake City, Tooele, Vernal Utah and was residing in Cheyenne, Wyoming at the time of his passing. He was predeceased by his wife Joan in 2009, and is survived by his brothers, Melvin and Marvin Laub, Jennifer Davidson, (Mark), Rebecca Southern, (Noel), Darren Laub, (Karen) and Gary John, (Rosalyn), 14 grandchildren and 3 great grandchildren. Memorial Services will be held at the Chapel of the Utah Veteran Memorial Park located at 17111 S Camp Williams Rd, Bluffdale, Utah on Friday, January 9th at 11:00 am. Please share condolences to www.serenityfhs.com

Dale returned to his Heavenly eternal home the first day of this new year, 1 January 2015, peacefully in his sleep of natural causes. He was born June 20, 1930 to Vasco and Alta Lealette Laub, and was brother to twins, Marvin and Melvin Laub,... View Obituary & Service Information

The family of Dale Jay Laub created this Life Tributes page to make it easy to share your memories.

Dale returned to his Heavenly eternal home the first day of this...