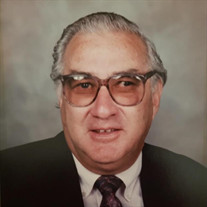 Dan LaVell Meadows was born February 23, 1937 to Charles and Sarah Leona Florence Meadows in Salt Lake City, Utah. He passed away on August 11, 2020 at his home in West Jordan Utah surrounded by his family. Dan was the youngest and last surviving sibling in his family. There is surely a great reunion happening in Heaven with his Dad, Mom, brothers and sisters that have been waiting there for him. Dan grew up in Salt Lake City, and spent Summers on his Grandma Cook's farm. He talked about the hard work and fun he had there. He served in the U.S. Army from 1957-1963 as a mechanic, and spent a year in Korea. He married Lorene Howard on March 12, 1960 and they had two children, and later divorced. He married Nancy Ruflin on August 4, 1968. They had 9 children, and later divorced. He worked as a salesman at Butterfield Ford for many years, and thought highly of the Butterfield family. He was a social butterfly and loved to talk to everyone he met. He enjoyed fishing and hunting, and looked forward to hunting trips in the Bookcliffs with his family. He enjoyed visiting with his neighbors, and the family would like to express appreciation for the care and time they took to make sure he was safe. Dan is survived by his 11 children, Tina Morrison (Michael), Jodi Hall (Raymond), Darren Meadows (Jana), Tammy Harrell, Lisa Thomas, Pam Grappendorf (Mat), Teresa Moore (Doug), Jennie Losee (Charlie), Jamie Smith (Paul), Tony Meadows (Becky), and Carrie Davis. He has 34 grandchildren and 29 great grandchildren. He has a great grandson due in January 2021 that he's watching over in heaven until his arrival, and two angel babies that he met in heaven. A viewing will be held on Friday August 14, 2020 from 3:00-5:00 pm at the Serenity Funeral Home located at 12278 South Lone Peak Parkway in Draper Utah. A graveside memorial will also be held on Monday August 17, 2020 at 10:00am at the Utah Veterans Cemetary & Memorial Park, located at 17111 South 1700 West in Bluffdale Utah.

Dan LaVell Meadows was born February 23, 1937 to Charles and Sarah Leona Florence Meadows in Salt Lake City, Utah. He passed away on August 11, 2020 at his home in West Jordan Utah surrounded by his family. Dan was the youngest and last surviving... View Obituary & Service Information

The family of Dan Lavell Meadows created this Life Tributes page to make it easy to share your memories.