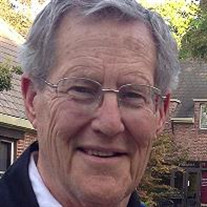 Daniel Herbert Lundgren, 79, passed away on December 26, 2017 in Salt Lake City, UT surrounded by his family. Born May 14, 1938, in Topeka, KS to Herbert Roland Lundgren and Perle Dorothea Poort, Dan was married to his sweetheart, Linda Dixon Lundgren, for 49 years. Dan grew up in Topeka, KS where he was an Eagle Scout and received the Order of the Arrow—Scouting’s National Honor Society. He attended Topeka High School then Kansas State University where he earned a master’s degree in Engineering and Architecture. While at Kansas State, he competed on the swim team and specialized in the back stroke. After a few memorable fishing trips with his uncle in Utah, Dan moved out west in search of more fishing adventures, and to start his career as an architect. While living in Provo, UT Dan met the love of his life Linda Dixon on a blind date. They were engaged within six months and married a few months later on June 15, 1968. Dan dedicated his life to his family and was a devout member of The Church of Jesus Christ of Latter-day Saints having converted while living in Provo. Dan enjoyed cooking, gardening, and, of course, fishing. His spirit of adventure was evident in the many travels that he enjoyed planning and taking with his family. Dan was preceded in death by his parents, as well as his sister Ann and brother-in-law (Jim Paden). He is survived by his wife Linda, and children Jeff Lundgren (Salt Lake City, UT) and Kristin Lundgren (Littleton, CO). Services will be on Tuesday, January 2, 2018 at Meadowbrook Chapel, 678 S. 950 W., Springville, UT 84663. Viewing will be held at 10:00am followed by funeral services at 11:00am. Interment will follow at Payson City Cemetery. Thank you to Rocky Mountain Hospice for their excellent care and support for Dan in his final days. Please share memories and condolences at www.serenityfhs.com. Order of the Arrow: I will always…endeavor, so far as in my power lies, to be unselfish in service and devotion to the welfare of others.

The family of Daniel Herbert Lundgren created this Life Tributes page to make it easy to share your memories.