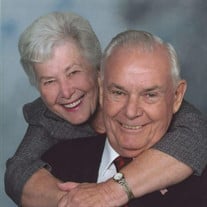 Sunday evening, March 11, the patriarch of our family, Darrell Eugene Wade, passed over to the other side. He was an amazing man who lived a full and fruitful life. Darrell was born in Eugene, Oregon on April 10, 1930. He grew up in a small town (Cascade) in Montana where he loved to fish, swim, garden, ride bikes or horses and explore the mountains around the town. In high school, he played on the football - basketball and baseball teams. He was in the marching band - on the yearbook committee and he sang in the choir - oh how he loved music. As a small boy he knew nothing about the church but every Sunday he would tune the radio to listen to the Mormon Tabernacle Choir performance of “Music and the Spoken Word”. When he met Betty many years later and was introduced to the gospel, his love for music and the choir were the first sparks of what would become his enduring testimony. Throughout his teen years Darrell worked on a ranch where he learned the life long lessons of hard work and integrity. He loved mowing the open fields of hay - helping with cattle round-ups (from horseback and airplane) and long hours spent with his friend and mentor Tuck Barrett. After graduating from high school, he joined the Montana Air National Guard and eventually was stationed near a small town in Southern Georgia (Quitman) where he met his eternal companion, Betty Jo Watson. Darrell and Betty were married on September 1, 1951 in Quitman, Georgia and then sealed for eternity in the Los Angeles Temple of the Church of Jesus Christ of Latter-Day Saints on October 10, 1956. Following their marriage Darrell joined the United States Air Force and throughout his career they traveled the world together, raising 7 children that turned into 36 grandchildren, 100 great-grandchildren (# 100 was born last week) and 1 great-great-granddaughter who he had the opportunity to meet and love. His family meant the world to him. He served his country well and spoke often of his time in the Air Force. He loved his family, having come from an incredibly small family of his own. We'll always remember him as a boisterous, loving, gentle giant of a man who played with his grandkids, teaching them to fish and spending time out on the river in front of his home in Florida. A year ago this month, his wife of 66 years passed and he began his slow descent, as he missed her terribly and longed to be with her again. Six weeks ago he fell and got an infection in his hip and even after a surgery to try and repair it, he was ready to leave this world and join his eternal companion on the other side. He died on his own terms, surrounded by family, reminiscing about his life and legacy. Sunday evening he took his final breaths and passed away peacefully. He can now run and move free of joint pain, and can also now enjoy the next chapter, reunited with the family who had gone before him, his mother who passed away when he was just 4 1/2 years old - as well as his 3 brothers (2 died as infants and his only living sibling passed away just exactly one week ago). We cannot even imagine the joy his mother must be experiencing having her 4 boys together for the first time ever. On April 7th we'll lay his body to rest next to Betty's back in Georgia where they met. An open house service will be held on Saturday March 24, 2018 at 10:30 am. at the Serenity Funeral Home (12278 S Lone Peak Pkwy, Suite 103, Draper, UT 84020). Funeral service will be at 11:00 am on April 7th at the Oak Hill Cemetery in Quitman, Georgia (Maxwell-Miller Funeral Home, 908 N Court St, Quitman, GA).

Sunday evening, March 11, the patriarch of our family, Darrell Eugene Wade, passed over to the other side. He was an amazing man who lived a full and fruitful life. Darrell was born in Eugene, Oregon on April 10, 1930. He grew up in a small... View Obituary & Service Information

The family of Darrell Eugene Wade created this Life Tributes page to make it easy to share your memories.

Sunday evening, March 11, the patriarch of our family, Darrell...