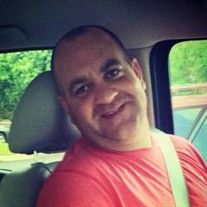 David Richard Anderson, 39 of Orem, Utah, returned to his Heavenly Father on August 8th, 2017 with his family by his side. He was born January 15, 1978 the third child of Richard L. Anderson and Nancy (Kingsbury) Anderson in Provo, Utah. David grew up in Orem, Utah. He attended Mountain View High School where he met his high school sweetheart Amber Michele Mecham. They were married their senior prom night on May 4th, 1996. They had 3 beautiful children together. Kaylee (20) as well as twin boys Todd (18) and Tyson (18). David’s family was the highlight of his life. He loved his kids more than life itself and tried to be at all of their sporting events, school functions and church events. Occasionally work would not allow it so he would have Amber record it for him and send it to him so he didn’t miss it. He worked with his father and brothers doing construction from the time he was a teenager until 2011 and he loved every minute of it. He loved spending as much time with all of his family that he could no matter what they were doing. In 2011 he started working for FortuneBuilders. FortuneBuilders became a second family to him and he loved everyone he came in contact with whether it be the people he worked with or the students he was helping. David was full of life. He loved to laugh and was constantly pulling pranks on everyone. And yet at the same time he had the biggest heart and would literally give you the shirt off his back if you needed it. He loved kids and took every opportunity he could to play with his nieces and nephews. They had a way to pull the child out of Dave and he would play soccer, basketball, baseball, tag, and jump on the trampoline with them. They love their Uncle David. He is survived by his wife Amber (Mecham) Anderson of Orem, Utah. His children Kaylee Anderson, Todd David Anderson and Tyson Mark Anderson. His parents Richard and Nancy Anderson of Lindon, Utah and his brothers and sisters: Jason (Karen) Anderson of Lindon, Utah; Michelle Gaudio of American Fork, Utah; Shawn (Kristi) Anderson of San Diego, California; Kasia (Branden) Bushinski of Lindon, Utah; and Kyle Anderson of Lindon, Utah. He was preceded in death by his brother Mark Richard Anderson and his grandfather Jack Kingsbury. A funeral service will be held Tuesday August 15th, 2017 at 11:00am at the Northridge Stake Center building 1660 N. 200 W. Orem, Utah 84057. A viewing will be Monday from 7-9pm and again Tuesday morning from 9-10:30am also at the Northridge Stake Center building. Interment will be at the Orem City Cemetery. The family would like to thank all of his doctors and caregivers at American Fork Hospital as well as the doctors and caregivers at Intermountain Medical Center in Murray, Utah. They made it a lot easier for David to round third and head home for the start of his next inning.

David Richard Anderson, 39 of Orem, Utah, returned to his Heavenly Father on August 8th, 2017 with his family by his side. He was born January 15, 1978 the third child of Richard L. Anderson and Nancy (Kingsbury) Anderson in Provo, Utah. David... View Obituary & Service Information

The family of David Richard Anderson created this Life Tributes page to make it easy to share your memories.

David Richard Anderson, 39 of Orem, Utah, returned to his Heavenly...