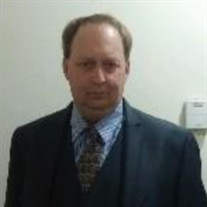 David (Dave) Brent Dyson of Tooele, UT born February 27, 1956 passed away at home unexpectedly of heart disease on Saturday September 26, 2020. He was born to Frederick Patrick Dyson and Iris (Lane) Lamoreaux, who immigrated from England to the Western US. Survived by his wife Shawna (Rynearson) Dyson of 35 years, and siblings Keith P (Diane) Dyson, Elizabeth Davis-Caldwell and numerous cousins, nieces, and nephews in which his interactions were joyful. His most cherished homes were all in Utah - Charleston (Deer Creek), Bluffdale (river bottoms), Sandy (Danish Road), Francis (Ranch), Hurricane (His art center), Tooele (home of retirement), in which he took pride in. Served the U.S. Army during the Vietnam Era in Germany. Dave’s occupation was in structural steel as a journeyman fitter\welder and journeyman millwright. One of his most enjoyable jobs was erecting paint booths for large equipment. He also erected office structures in Salt Lake and rock crushing equipment in Coalville. He took pride in his flawless I-beam work in Washington Utah. Proprietor of Quality Welding Services LLC where he created Iron Heart Roses. Two of his recognitions were news articles for his creative ironwork. The Spectrum News for his Iron Heart Roses and Salt Lake Tribune for a life size iron palm tree beach feature. His hobbies included fishing, hunting, snowmobiling, four-wheeling, visiting family in England, and supporting the Utah Jazz basketball team as an avid fan which included season tickets (with mother, sister, and wife) and a memorabilia collection. Dave had a love for all animals. He talked of his horse Ginger and how they were bonded as one, also of bottle feeding the bummer lambs, along with all types of farm life in his younger years that carried over to their home in Francis, Utah. In his latter years he was the dad of several dogs Princess, Snickers, Patches, Raskel, and Jazz. Dave had the ability to befriend all that he met and was always willing to help where there was a need. A reflection of life will be held at a later date, family and friends will be notified once arrangements have been made.

David (Dave) Brent Dyson of Tooele, UT born February 27, 1956 passed away at home unexpectedly of heart disease on Saturday September 26, 2020. He was born to Frederick Patrick Dyson and Iris (Lane) Lamoreaux, who immigrated from England to... View Obituary & Service Information

The family of David Brent Dyson created this Life Tributes page to make it easy to share your memories.