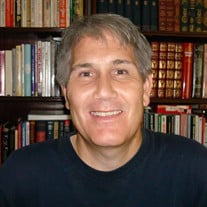 David Reed Fellows, 58, of Mission Viejo, CA, passed away on February 11 from pneumonia. David was born on January 25, 1963 to Alfred L. and Marilyn Reed Fellows in Salt Lake City, UT. After graduating from Highland High School and serving an LDS Mission to Argentina and Oregon, he moved to Southern California where he pursued his education. He graduated from University of Southern California in Architecture. He subsequently graduated from the University of California, Berkeley with a master’s degree in Architecture. David was a gifted architect and worked in that field for 20 years with distinction. He interned under the legendary Frank Gehry and worked for some of the top architectural firms in Southern California. He was Chief Architect at Scenario Design in Los Angeles before he went out on his own. While he was skilled in all aspects of the work – research, analysis, interpretation, and application of codes, building documentation, project management and presentations, it was design that he loved the most. David was an artist who found great satisfaction in bringing together form, function and beauty. David was a tireless and even fierce supporter of the homeless and downtrodden in every community he lived in. His sensitive nature would never allow him to pass someone in need and not stop to help. One sample of his efforts was setting up a fundraiser for a homeless man who had just lost the only thing he owned, his truck, which he had been living in for some time with his dog. David helped raise enough to allow this man to purchase another vehicle, which provided a home for them for another 2 years. Throughout his life, David was a devoted member of the Church of Jesus Christ of Latter-day Saints and strived to live the life of a disciple. David is preceded in death by his parents, and by his nephew Curtis Reed Fellows. He is survived by his siblings Kathy Fellows Brown (Vance), Suzanne Fellows, Dianne Fellows Cline, Marianne Fellows McKnight (David), Sharlene Fellows Oborn (Kirk), Matthew Fellows (Martha), Robert Fellows (Loisann), Mary Fellows Schmidt (Lance), Joseph Fellows, and his beloved dog Buddy. A private graveside service will be held on February 24th at Salt Lake City Cemetery.

The family of David Reed Fellows created this Life Tributes page to make it easy to share your memories.