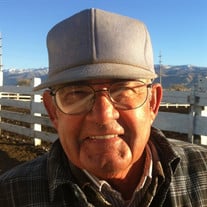 David Oman Hinckley, 79, of Salt Lake City, passed away on May 27, 2014 at his home after a battle with prostate cancer. Now, he is off to a new and what will surely be another great adventure! David Hinckley was born on September 15, 1934 in Salt Lake City, Utah to Rulon and Lucilla May Hinckley. He was the fourth of seven children. He was raised in Hinckley, Utah and Salt Lake City, Utah. He graduated from West High School, served in the military, and later attended Utah State University. He married Marilyn Petersen of Neola, Utah on June 27, 1958 (divorced) they had four children. He later married Kathy Holbrook Norton on June 20, 1987 (divorced) they had one child. David is a Veteran of the Korean War where he served in the Army and received an honorable discharge. He served in Alaska and loved it dearly for the rest of his life. He worked many jobs before he came home to the love of his life, the family farm. He has worked on the farm every day since then. However, he said he has never worked a day in his life-it was just fun. He farmed in Utah, Idaho, Wyoming, and Nevada. He partnered with his nephew, Rulon Spear and together they made a great team! David was an avid fisherman and hunter. While stationed in Alaska David claimed the biggest trophy of his life, a 7 ½ foot Kodiak Grizzly Bear. It hung on a wall of his home throughout his life, scaring children of all ages, which he took great delight in. David was a hard worker, prankster, and ever the optimist! If he wanted to do something, he found a way to get it done! He was a great story teller and master of many bird calls which entertained his children and grandchildren. He traveled the globe, and had an adventure every day of his life. He was a proud Farmer/Rancher who went out with his boots on! David was preceded in death by his son Dwight Hinckley, his parents Rulon and Lucilla Hinckley, and two siblings Lina Anderson and Richard Hinckley. He is survived by four siblings EllaRose Delong, Merry May Benson, Nadeane Spear and Mark Hinckley, His Children Steven (Bill Johnson), Kristen Faux (Jeff Faux), Heather Limon (Sergio Limon), and Dalon Hinckley, as well as, six step children, numerous grandchildren, great -grandchildren, nieces and nephews, and of course, by his herd of pure bred angus cows. David asked to be cremated so in lieu of a viewing we will be holding a memorial to celebrate his life at 10:00 a.m. followed by a traditional funeral service at 11:30 a.m. All services will be held at Dave's farm in the Old Red Barn on Saturday May 31, 2014 located at 3500 N 2200 W SLC, UT 84116. Interment will be in the Salt Lake City Cemetery.

David Oman Hinckley, 79, of Salt Lake City, passed away on May 27, 2014 at his home after a battle with prostate cancer. Now, he is off to a new and what will surely be another great adventure! David Hinckley was born on September 15, 1934 in... View Obituary & Service Information

The family of David O Hinckley created this Life Tributes page to make it easy to share your memories.

David Oman Hinckley, 79, of Salt Lake City, passed away on May...