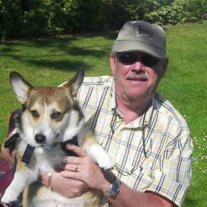 David Breinholt Larsen 1941 to 2013 David Breinholt Larsen known to most as “Dave” passed away peacefully on June 28 in the company of his family due to complications from cancer. He was an extremely intelligent man who lived life to the fullest. He was a loving husband; father, brother, uncle and grandpa. Dave was born in Salt Lake November 13th, 1941 to John and Arvilla Larsen. He grew up in Salt Lake and graduated from East High School where he was a national merit scholar. He graduated from the University of Utah with a degree in accounting. He pursued his career in accounting becoming a CPA, and partner at Coopers and Lybrand in Salt Lake City and A.V. Arias and Co. in San Diego California. He married Cathy MacCalman in 1965 and together they had two children David and Amy. Even though they divorced they remained life long friends. Cathy was able to be there and give her loving support when he left us. On April 25, 1983 Dave married the love of his life Beverley “Sandi”. They moved to San Diego, California to fulfill his dream of living by the beach. They spent 20 plus years there enjoying the southern California lifestyle. In 2006 they returned to Centerville Utah. They had 30 wonderful years together. Dave was a man of many hobbies. He fully enjoyed each and every one of them. He was a HAM radio operator with the highest credentials (Extra Class). In San Diego he volunteered in the Coast Guard Auxiliary. He was an artist, a sailor, a fisherman, a bird watcher. He built and flew model airplanes and had many more interests. After moving back to Utah he became range officer at the Fruit Heights shooting range where he was also treasurer. Preceded in death by his parents, and two brothers; John S. and James W. Larsen. Dave is survived by his wonderful wife Beverley “Sandi” Larsen, mother in law Jean Jackson, his devoted sister Jill Livingston, son David M Larsen (Wendy), daughters Amy Jones (Alex), Wendy Jenson, and Step son Harold Jenson (Shelly). He has seven amazing grandchildren; Rockland, Alexis, Isaiah, Thomas, Emily, Zoey, Alexander, many more loving family members and his beloved corgi Beethoven. He will be missed by all who knew him. Special thanks to Rocky Mountain Hospice, especially Robert, Heather and David. A Memorial will be held on July 6, 2013 at 10:00am at Salt Lake City Cemetery. There will be a celebration of Dave's life after the Memorial at the Larsen residence, 122 West 200 North, Centerville, Utah (Country Cottages). Special thanks to Serenicare Funeral Home, especially Peni Malohifo'ou and Kim Warner.

The family of David Breinholt Larsen created this Life Tributes page to make it easy to share your memories.