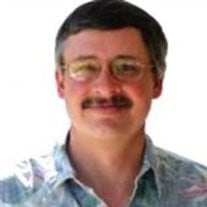 David Edward Orcutt II, 52, passed away unexpectedly early Monday morning, Dec 2nd, 2013, in Provo, Utah. He was born on Sep 25th, 1961 in Marianna, Florida to David Edward and Edith Geneva Keel Orcutt. He married Laura Robinson in Clovis, New Mexico on Sep 14, 1984. He was known to all as Ed or Edo. He was an extremely intelligent man who was immediately attracted to computers in his tech classes in the 1970’s. An only child, he was raised only by his mother most of his life in the small town of Marianna, Florida, His father passed away when he was young. He continued his passion for computers at the University of Florida where he received a Bachelors of Science in General Engineering with an emphasis in Computer Science. They did not have a computer science engineering degree at that time. He met his love, Laura, while there. Insisting he would follow her anywhere, they married the year he graduated from the University of Florida and began their adventure in the Air Force with her career. While they were in the Air Force, they lived in New Mexico, Nevada, Germany, Utah, and Hawaii before settling in Utah where their son was born. They have lived here the last 15 years. During their Air Force travels, he earned his Masters of Science in Computer Science, taught for the University of Maryland, and worked for a Department of Energy contractor on the Nevada Yucca Mountain nuclear repository sight. Once settling in Utah, he worked for Caldera/SCO on a Linux distribution and then began his entrepreneurial endeavors. He was a partner in Aculis Inc, a Provo software company, followed by owning his own software company, LOBOSLLC. His passion for the internet was quenched when he began working with Kynetx Inc. There he met brilliance that challenged and quenched his desire to program the undeveloped area of the internet. Laura is so blessed to have been married to him for almost 30 years. Davey, his son, is blessed to have known him his 14+ years of life. He always had one special cat in his life. They were/are Garp, Precious, and currently Tiger. In his honor and memory, his brilliance and intelligence were only surpassed by his wit which he held until the very end of his life. His dignity was always maintained by his humor. Ed is survived by Laura Robinson Orcutt, spouse, David Edward Orcutt III, son, aunts Doris Keel Patrick (Paul, husband, Spokane, WA), Pat Keel Malloy (Chipley, FL) and Linda Keel Kermode (Rich, husband, Sterling Heights, MI), Uncle Ronnie Keel (Dianna, wife, Marianna, FL), and numerous cousins on the west coast, Michigan, Virginia and in Florida. He is preceded in death by David Edward Orcutt, his father, and Edith Geneva Keel Orcutt, his mother. All are invited to celebrate his life on Sat, Dec 7 for a reception at 9 am with the funeral service to follow at 10 am at St James Episcopal Church, 7486 Union Park Ave, Midvale, Utah and to conclude with the graveside service at Highland cemetery, 6200 W 11000 N, Highland, Utah. Thank you to the many friends and neighbors in Highland, the people of Kynetx Inc, Sharon Stetz, Hospice Chaplain, Rev Jan Katuby, and the parishioners of St James Episcopal Church for their care and concern.

The family of David Edward Orcutt II created this Life Tributes page to make it easy to share your memories.