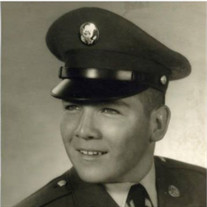 David Edwin Salazar died peacefully surrounded by family on April 3, 2021 in American Fork, Utah. He will be remembered as a husband, Army veteran, beloved brother, father, grandfather, and great-grandfather. David was born on March 12, 1944 in Los Angeles, California to Jesus “Jesse” Nevarez Salazar, a native of San Luis Potosi, Mexico, and Clara Pauline Ventris, from Oklahoma City, Oklahoma. At the young age of 17, he joined the U.S. Army and was stationed in Berlin, Germany’s American zone during the cold war beginning in 1961. After serving his country, he married Rosemarie Gonzales after telling family they were “going out for chili dogs” on December 14, 1964 in Los Angeles, California. Together, they had four children: David Jr. (Millcreek, UT), Jeanette (American Fork, UT), Loretta (Taylorsville, UT), and Marilyn (Taylorsville, UT). In 2000, he later married Diane Lares of Madera, California. Dad will be remembered for the many talents he shared with his family, friends, and neighbors. He created many handcrafted wood projects, maintained and repaired autos, and remodeled our family home including the addition of a 4-car garage where he enjoyed spending time on hobbies and home projects after work and on weekends. He even ambitiously trained as a pilot and flew a two-seater airplane, which he built from a kit! Among the things he loved, Dad enjoyed going to the movie theater, sitting with a buttered popcorn and watching sci-fi movies. But family, above all else, was the most precious and important thing to him. He was a good listener and later in life ended each phone call saying: #SayHiToTheGang & #LoveYouAll. Other favorite sayings his children and grandchildren will remember hearing include: #NoCuttinUp #ReadTheManual #HeyKid David is preceded in death by his parents; sister, Jeanette; and, brothers, Jimmy, Ray, and Jesse. He is survived by siblings Carol, Kathleen, Mary, Vicky, and Paul; children: David Salazar, Jr., Jeanette Albers (David), Loretta Brazelton (Wade), Marilyn Tuivaiti; nine grandchildren, Michael, Andrew, Catherine, Penina, Daniel, Caleb, Coy, Bronson, and Collin; five great-grandchildren, Henry, Jack, Elowyn, Iris, and Astro; wife, Diane, and stepsons, Johnny and Raymond. WE LOVE YOU DAD! We’ll see you, and say “hi” to the gang on the other side. SERVICE INFO: A private service will be held for the family. SPECIAL THANKS: We are grateful to the doctors and several staff who provided care at Huntsman Cancer Institute, hematologist/oncologist Dr. Karen Lin (St. George, UT), and the nurses and medical support staff with Intermountain Home Health and hospice care services.

The family of David Edwin Salazar created this Life Tributes page to make it easy to share your memories.