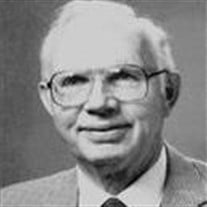 David Arnold Schulthess passed away October 26, 2014 from pneumonia at the age of 90. He was born January 11, 1924 to Heber Billeter and Alice Foote Schulthess. He grew up in the Highland Park area of Los Angeles where he graduated from Franklin High School. At the age of 14, his father died leaving David, the oldest of 3 children, to help provide for the family. He was drafted into the U.S. Army 43rd Infantry during WWII serving primarily in the South Pacific and saw combat despite being the company clerk. He claims that being the only serviceman that knew how to type was what saved his life. Upon returning from the war, he took advantage of the GI Bill which enabled him to attend Brigham Young University where he served as the Editor of the DAILY UNIVERSE and the ALUMNUS MAGAZINE. He graduated in 1950 with a major in Sociology and a minor in Journalism. It was after graduation, while he was working in Salt Lake City for the TELEGRAM and the SALT LAKE TRIBUNE that he met the former Francilda Wood. They were married in the Salt Lake Temple in March 1952. In 1951, David was hired as the first fulltime Sports Information Director at BYU. He played a vital role in Cougar athletics and was instrumental in procuring numerous national awards for the athletes. With innate class and social grace, he worked closely with the media and earned their respect and affection. At the pinnacle of his 37 year career, he was elected to serve as President of the College Sports Information Directors of America (CoSIDA) in 1979-80. Ironically, while promoting recognition for athletes and the University, he received many awards in affirmation of his own talent, hard work and dedication. A devout member of The Church of Jesus Christ of Latter-day Saints, he found much joy in serving in ward, stake and regional capacities. David will be remembered as a soft-spoken, humble, generous man who displayed genuine affection and acceptance of all with whom he came in contact. He is preceded in death by his wife, Fran and his brother, Richard. Survived by his children: Alison (Randy) Wentzel of El Dorado Hills, CA, Tod (Carlene) Schulthess of Alpine, UT, Patrice (Grant) Beckmann of Orem, UT and Ann Schulthess of Folsom, CA. Also, survived by his sister, Shirley Rice Openshaw, 9 grandchildren and 8 great-grandchildren. Visitation will be held Saturday, November 1, from 9:00-10:15 am followed by the funeral at 11:00 at the Heatheridge Stake Center located at 450 East 2000 North in Orem, Utah. Interment will be at the Orem Cemetery. Donations may be made to the LDS Church Missionary Fund.

David Arnold Schulthess passed away October 26, 2014 from pneumonia at the age of 90. He was born January 11, 1924 to Heber Billeter and Alice Foote Schulthess. He grew up in the Highland Park area of Los Angeles where he graduated from Franklin... View Obituary & Service Information

The family of David Arnold Schulthess created this Life Tributes page to make it easy to share your memories.