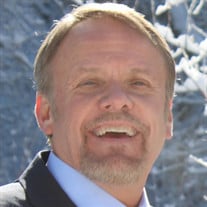 Our loving husband, father, and grandfather passed away peacefully at his home following a short, but valiant, battle with cancer. Dave was born on December 27, 1956, to Sterling Hal and Carolyn Davis Shuler in Provo, Utah. Dave was the fourth of six children and grew up in a loving home on the “Goosenest Ranch” in what is now the city of Elk Ridge, Utah. Dave would often reflect on his many fond memories of growing up on the farm and treasured his simple farm roots. As a lifelong member of the LDS church Dave served a mission to the Milan, Italy Mission. Upon returning home he met and married Terri Hamilton on May 25, 1979. Together they had five children. They later divorced. On Thanksgiving Day, November 24, 2016, he married Ashley Barker Tolman. Dave graduated from BYU with a degree in Earth Science and a master’s degree in Anthropology. Dave’s passion for serving others extended into his life’s vocation. Upon graduating from BYU he worked for the Church Educational System where he taught seminary and institute. Dave taught in Princeton, New Jersey, for over three years before going on to establish the CES program in India. After leaving CES, Dave went to work for BYU supervising students as they prepared for international internships and field studies. Through his programs he has touched the lives of thousands of people throughout the world. Dave truly loved teaching and mentoring students. Even after being diagnosed with his illness, and as recently as three weeks ago, Dave was still attempting to teach his new “happiness course” to inmates at the Utah State Prison through Salt Lake Community College. As a lifelong student himself, Dave continually sought knowledge and understanding. He loved learning about other cultures and has traveled extensively throughout the world on his quest to better understand his fellow man. Dave is survived by his loving wife Ashley Shuler of Salt Lake City, his children Joseph (AmberLee) Shuler, Jacob (Cassandra) Shuler, Joelle (Brandon) Rasmussen, Jessica Shuler (Clay Olsen), and Julia Shuler; his siblings Karl (Sharon) Shuler, Wendy (Lee) Pope, Jay (Kate) Shuler, Brad (Melissa) Shuler, and Sarah Shuler; seven grandchildren Deryck, Jaivri, Alyssia, Brianna, Kyla, Lucas and Nora. Dave was preceded in death by his parents. Funeral services will be held Friday, November 3, 2017, at 11:00 AM at the LDS chapel at 951 E 100 S in Salt Lake City. Family and friends may call Thursday, November 2 at the chapel from 6 PM to 8 PM or Friday from 9:30-10:30 prior to the service at the chapel. The family wishes to express their heartfelt thanks to the doctors and staff at the Huntsman Cancer Institute. In lieu of flowers the family has asked that a donation be made to an international NGO / charity in Dave’s name. “I don’t die…He who is merged with the omnipresent is never gone” ~ Guru Nanak

Our loving husband, father, and grandfather passed away peacefully at his home following a short, but valiant, battle with cancer. Dave was born on December 27, 1956, to Sterling Hal and Carolyn Davis Shuler in Provo, Utah. Dave was the... View Obituary & Service Information

The family of David Allan Shuler created this Life Tributes page to make it easy to share your memories.

Our loving husband, father, and grandfather passed away peacefully...