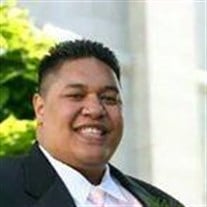 David Pepa Taufui, Jr February 13, 1980 - October 18, 2014 David Pepa Taufui Jr., age 34, Our beloved son, brother, grandson, nephew, cousin and friend was called back home to our Heavenly Father on October 18, 2014. Having been born of goodly parents Tevita Pepa and Meridian Melivao (Maumasi) Taufui on February 13, 1980 in Redwood City, CA and raised in Salt Lake City, UT. He was the eldest of nine children. He graduated from Granite High School and diligently served a full-time LDS mission in Spokane, WA. D.J., as everyone knew him by,dedicated his life to serving all those around him wholeheartedly whether it be through music or random acts of kindness. He will be greatly missed. He is survived by his parents; his siblings Charles, Denise Gonzalez (Juan), Michael (Carly), Emma, DawnKatie, Victor (MacKenzee), Va Garcia (Jose); aunts, uncles, and cousins. Preceded in death by his younger brother Henry and his grandparents. Funeral services will be held in his honor on Saturday, October 25, 2014 from 12 p.m. - 1 p.m. at the Springview Ward (3153 South 900 East, SLC, UT 84106). Friends will be received prior to services from 10 a.m. - 11:45 a.m. Burial at Wasatch Lawn (3401 South Highland Drive, SLC, UT 84106) provided by Serenity Funeral Home. Services are under the direction of Peni Malohifo'ou of Serenity Funeral home

The family of David Pepa Taufui created this Life Tributes page to make it easy to share your memories.