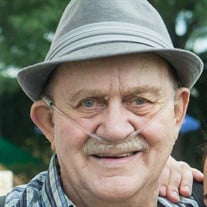 David Jack Wagstaff, 74, passed away on Saturday, July 18th with loved ones by his side. He was born July 28, 1940 in Salt Lake City, Utah to Herman and Aleta Petersen Wagstaff. Married Mary Ellen Eastman 1957, later divorced. Married Joyce Crockett 1999, deceased. His greatest accomplishment in life were his children. He lived for his grandchildren and great grandchildren. He was a skilled contractor. He help to build hospitals, casinos, shopping centers and numerous houses. He enjoyed fishing, hunting, trap shooting, golfing and reading. He taught his children the value of hard work and love of the great outdoors. No matter where he was his goal was to make people laugh with his jokes and good humor. His advice to his family, written in his own words: “Lessons learned in life- always talk things over with your mate. Be honest, don’t lie. It always comes back to bite you. Don’t drink or smoke. It ruined my life. Love the best way you can. Don’t say anything to hurt others. The same thing goes for my grands and great grands.” Survived by his children, Tammy Roper (Teryl), Terilyn Moffett (Cory), Trisha Marchant (Kirk), Todd Wagstaff (Cindy), 22 grandchildren and 23 great-grandchildren. Brothers and sisters, Keith Wagstaff (Kathy), Faelyn Kleinworth (Frank), Cheryl Anderson (Mike), and Mark Wagstaff (Pam). Preceded by wife, Joyce, parents, sister Janice Magers, brother Dennis Wagstaff and his beloved dog Peaches. Graveside service will be held on Tuesday, July 21 at 11:00 a.m. at the Sandy City Cemetery. Thanks to the many caring people at Holladay Heathcare Center and his physician and friend, Dr. and “hero” Christopher Jones.

The family of David Jack Wagstaff created this Life Tributes page to make it easy to share your memories.

David Jack Wagstaff, 74, passed away on Saturday, July 18th with...