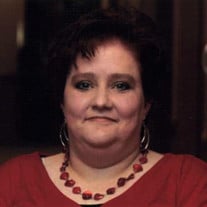 Dawn DeGraw Jackson passed away, peacefully in her home on Thursday March 17, 2016. She was born on February 21, 1972 in Murray, Utah to loving parents Lloyd T. DeGraw and Merla C. DeGraw. Dawn grew up in Sandy, Utah. She was an active member of the Church of Jesus Christ of Latter-Day Saints. She graduated from West Jordan High School in May of 1990. She married William K. Farris on February 1, 1993. They had a daughter, Amanda A. Farris, and a son, Matthew K. Farris. Approximately 1 ½ years later they divorced. She worked at the Deseret Industries where she met Alan R. Jackson and they later married on June 26, 2010. Dawn was given great care through Primary Children's Hospital for more than 2 decades. She and her family were blessed by the many donations received thru the March of Dimes, “Pennies by the inch”, and Easter Seals. These donations allowed for many numerous surgeries and care that were necessary for her well-being. One of her favorite activities was camping with family. As a child, she looked forward to summer camp at Camp Kostopulos. Her favorite color has always been purple. To mention a couple of highlights in her teenage years: She and her sister experienced the adventure of river rafting with “Splore” (a recreational group for people with disabilities) on the Green River in Moab. She really enjoyed Senior Prom with her older brother Doug. Later on, she had a great time going to the movies with her younger brother, Paul. Other pastimes she enjoyed included poems, playing cards and board games, collecting movies and music. Disney movies were a favorite because she loved happy endings. Michael Landon was a person that she looked up to for his work in bringing great family entertainment into homes. Her favorite tv series were “Little House on the Prairie” and “Highway to Heaven”. Music also played a big part in her life and she was interested in a broad variety. Dawn loved her children very much. Dawn had a great love of animals especially her dogs Tausha and Lady, and her cat Sebastian. She taught Primary and Sharing Time for her church and her last calling in her ward was compassionate service assistant. Acts of service brought her joy and fulfillment. Her children still remember making and running treats to neighbors. She enjoyed meeting new people and sharing stories. She will be missed. Survived by her husband, Alan R. Jackson; daughter, Amanda A. Farris; son, Matthew K. Farris; mother, Merla C. DeGraw; her siblings, Dorene D. Turner, Doug L. DeGraw, J. Paul DeGraw, 5 nieces, and 7 nephews. Preceded by her father, Lloyd T. DeGraw; and her younger brother Byron DeGraw. A Celebration of Life funeral service will be held Tuesday, March 22nd at 11:00 am at the Crescent 28th Ward, 11626 S. 300 E., Draper. IN LIEU OF FLOWERS, donations to help pay for funeral costs would be greatly appreciated.

Dawn DeGraw Jackson passed away, peacefully in her home on Thursday March 17, 2016. She was born on February 21, 1972 in Murray, Utah to loving parents Lloyd T. DeGraw and Merla C. DeGraw. Dawn grew up in Sandy, Utah. She was an active member... View Obituary & Service Information

The family of Dawn DeGraw Jackson created this Life Tributes page to make it easy to share your memories.

Dawn DeGraw Jackson passed away, peacefully in her home on Thursday...