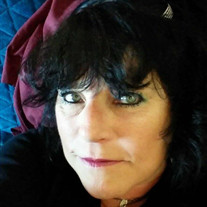 Debbie Idonna Parker joined her Heavenly Father and her beloved husband in heaven on December 14, 2016. A viewing followed by funeral services will be held at Serenity Funeral Homes in Draper Utah (12278 S. Lone Peak Pkwy #10) on Saturday December 17, from 1:00-3:00 P.M. Details regarding the services in California will be shared at a later time. Debbie was born on April 13, 1957 to Wesley Harrison Smith and Margie Rosella Smith. She later met and married the love of her life, Scott Harvey Parker and they shared 42 loving years together. They had six children, 15 grandchildren, and one great-granddaughter. Family was the center of their world along with their love of God. Debbie was known to say, “I raised my best friends.” Later in life, Debbie discovered that she loved traveling, walking, music, and playing games with her kids and grandkids. She was beautiful from the inside out and enjoyed anything sparkly, blingy, or feminine. She enjoyed life with a child-like enthusiasm, including playing night games with her adult children and grandchildren. She touched the hearts of everyone around her and was a beacon of joy, faith, and love. She is survived by her six children: Misty (Jeff) Moebius, Shadette Tafoya, Jadie (Jason) Stonebraker, Darius (Kandice) Parker, Shalese Parker (Jeremy Farris), and Derek Parker. Her grandchildren: Austun, Tyler, Logan, Bryce, Dustin, Brandon, Landon, Marissa, Cody (Rilee), Hailey, Brook, Autumn, Trinity, Aiden, one great-grandchild Troylyn and her siblings: Kathy Pace, Wesley Smith, and Harrison Shane Smith. She was preceded in death by her beloved husband Scott Harvey Parker, her three sister Diane Iker, Patty Smith, Honeybee Smith, and her parents Wesley Harrison Smith and Margie Rosella Smith. A Go Fund Me account has been set up to help the family get Debbie Parker home.

The family of Debbie Idonna Parker created this Life Tributes page to make it easy to share your memories.

Debbie Idonna Parker joined her Heavenly Father and her beloved...