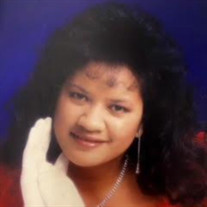 Deborah Fa'amausili - Funeral Service Time: Jun 16, 2021 09:00 AM Mountain Time (US and Canada) Join Zoom Meeting https://us02web.zoom.us/j/89120045407?pwd=MzJ2STRvZFVEQzkyNnZkOE5lWU1mdz09 Meeting ID: 891 2004 5407 Passcode: Serenity Deborah Tavita Fa’amausili 1965 ~ 2021 Debbie, known as “Pola” to family, 55 years old serenely passed away at home Tuesday, June 8, 2021 after a long-fought battle with cancer. Pola was born July 27, 1965 in Pago Pago, Samoa. Her family moved to Southern California while she was young. In the early 1990’s Pola migrated with the rest of her Fa’amausili family to the Salt Lake Valley. It was there that she provided for her family while working as a single mother at Merit Medical for over 20 years. At a young age Pola learned to serve others as her family was a host family to MANY others who moved from the islands of Samoa. She could always be found in the kitchen preparing meals for guests or in another part of the house tending many nieces and nephews. Family was a priority to Pola and she was always willing to serve them. She always brought peace into the home and was always selfless, wanting to help others to be content. She taught this attribute to her most beloved daughters, Arianna Faumuina(Darrion) & Savannah Fa’amausili. Her daughters brought her an immense amount of joy in this life. When Pola was told that her remaining time on earth was short, her only request was to spend that time with her daughters. Quality time was spent traveling to various places that were on her “bucket list”. Pola was a simple person, which showed as these desired destinies were all in the United States. Pola and her girls were able to visit Seattle, Boise, and New York. Their final trip together was to Florida, where many wonderful memories were made. Pola chose to follow Christ as a member of The Church of Jesus Christ of Latter-Day Saints. She had great faith in the gospel and portrayed that faith to all of those around her. She was able to witness the effects of her example as she accompanied both of her daughters to the temple. Pola understood the Plan of Salvation and was looking forward to continuing her mission across the veil. While we will miss her greatly, we know she had a happy reunion with those in her immediate family who preceded her in death—her parents Tavita & Vaimaila Fa’amausili and her brother David Fa’amausili. Deborah Tavita Fa’amausili was truly an angel here on earth, who has now graduated and advanced to Heaven. We are certain her diploma reads, “Well Done, thou Good & Faithful Servant!” We invite you to come celebrate Pola’s “graduation of life” on Wednesday, June 16, 2021 from 9am-11am. Services will be held at 87 E 7100 S, Midvale, UT 84047. Interment at 12:30pm at Herriman Cemetery, 12465 Pioneer St., Herriman, Utah.

The family of Deborah Tavita Fa'amausili created this Life Tributes page to make it easy to share your memories.