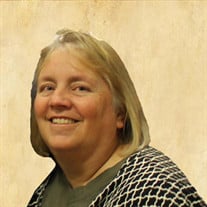 Debra Kay Olsen, age 59, loving wife, mother, sister, daughter, and friend peacefully passed away in her home Wednesday, October 21, 2020, after a four year battle with breast cancer. Debbie was born in Idaho Falls, Idaho on November 3, 1960 to Eli Lance Krommenhoek and Jean Wood Krommenhoek. She was the second child of six children. Her family moved to Boise, Idaho where Debbie attended school from second grade through high school, graduating from Boise High School in 1979. Debbie loved to be active, play sports and marched on the Boise High Thunderbirds drill team squad. She worked as a lifeguard through college and shared her love of water with her family. Debbie attended Ricks College and then moved to Salt Lake City to work in a downtown accounting office. It was during this time that Debbie met David Richard Olsen. Dave and Debbie were married in the Logan, Utah LDS temple July 7, 1988. They began their married life in Sandy, Utah. They welcomed five beautiful children into their home and raised their family in Riverton, Utah. Her family was the love of her life. She loved having her children and all their friends in her home and her door was always open. She enjoyed taking family vacations to Disneyland, Cedar City for Shakespeare Festival, and especially Bear Lake with her extended family and the hours on the lake. Debbie loved to quilt, bake goodies, and was very artistic. She always had a love for all animals and always had one in her home. As her cancer progressed, her favorite activity became riding in the car, visiting with the driver, and watching the seasons change. She also liked to drive through for a milkshake or a treat. Her husband, children and many dear friends accompanied Debbie with this new favorite activity. Debbie was always active in The Church of Jesus Christ of Latter-Day Saints and had faith and a strong testimony. She served in many different callings in cub scouts and Primary. Her strength and testimony was an example to everyone around her. She is survived by her husband Dave; her children Ashley Kate, Amanda Beth, Jacob David, Jared Daniel, and Hailey Lynn. She is also survived by her father Eli Krommenhoek and her siblings, Jeanine (Steve) Berglund, Diane (John) Bollinger, Angela Krommenhoek, and Brad (Nina) Krommenhoek. She was preceded in death by her mother, Jean Krommenhoek and her brother, Marvin. A celebration of life will be held Thursday, October 29th at 9:00 am for the family and the public celebration will start at 10:00 am at The Church of Jesus Christ of Latter Day Saints meeting house at 12232 South 3200 West RIVERTON, 84065 Utah Graveside service will be held in Logan, Utah on Thursday, October 29th at 2:30 pm at the Logan Cemetery 1000 N 1200 E, Logan, UT

The family of Debra Kay Olsen created this Life Tributes page to make it easy to share your memories.