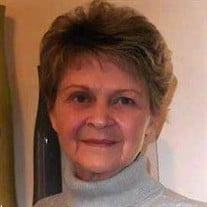 Loving daughter, mother, sister and friend to all she met. She fought a knock down drag out fight with lymphoma, but lost her battle the morning of January 27 2016. DaNaze was born on April 27, 1945 in Cardston, Alberta Canada to Albert and Fern Earl. She always liked to tell people that she was born a day before her mom and dad got married as they celebrated their first anniversary on April 28. She leaves behind a loving daughter Michelle, her son Bret, grandchildren Tristan, Sabian, Jayce, Griffin. She loved them so, always talking about their achievements and milestones. She grew up in Bountiful Utah and later moved to Brigham City with the family. She loved music, makeup, fashion and boys. She was always beautiful and was even asked to run for Peach Queen in Brigham City. She could make dresses without a pattern, and would cut hair for her family without ever having instruction. She was an amazing person as anyone who knew her would tell you. She went on to earn her Associates Degree in computer programming but found her passion in travel. She especially loved taking people on trips to places that she knew would change them and help them grow. Peru, Japan and Russia were some of her favorites. She met many people and formed strong friendships with people around the world. Her family had the pleasure of joining her on some the trips. She married twice. Once to Dallas Jorgensen with whom she had two children, Bret and Michelle and then to Kim Dalby with whom she had two, Travis and Camille. She is proceeded in death by her parents Albert and Fern Earl, children Travis Kim Dalby, Camille Elise Dalby and grandson Ayden Jaxon Bosh. She is survived by her sisters, Barbara Clement, Joanne Francis and her brother Wayne Earl, children Bret Dalby and Michelle Dalby, grandchildren, Michael Dalby, Tristan Dalby, Sabian Dalby, Jayce Rigler and Griffin Dalby. She will be missed by many but dwells with her parents and children and in the hearts of the remaining people. She can be out of pain and flying with the wings of an angel. We thank her for the many blessings she brought, lessons she taught and gifts she bestowed on all her who had the privilege to know her. As quoted by Michael Cunningham from "The Hours": To look life in the face. Always. To look life in the face and to know it for what it is. And loss. To know it. To love it for what it is, and then, to put it away.

Loving daughter, mother, sister and friend to all she met. She fought a knock down drag out fight with lymphoma, but lost her battle the morning of January 27 2016. DaNaze was born on April 27, 1945 in Cardston, Alberta Canada to Albert and... View Obituary & Service Information

The family of Della DaNaze Dalby created this Life Tributes page to make it easy to share your memories.

Loving daughter, mother, sister and friend to all she met. She...