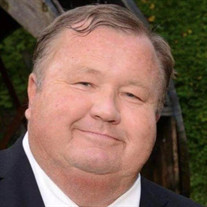 On Wednesday, March 18, 2020, Dennis Quinn Cooper, loving husband, father, grandfather, brother, uncle and friend passed away at the age of 70 after a long battle due to the complications of a stroke. Dennis was born on April 20, 1949 in Salt Lake City, Utah to Joseph Odell and Norma (Summers) Cooper. He graduated from West High School in 1967. On June 6, 1969, he married his high school sweetheart Cheryl Knight Cooper in the Salt Lake Temple. Together they raised 4 daughters in West Jordan, Utah. During his life Dennis had many hobbies. He enjoyed woodworking, ham radios, singing, playing the guitar, playing basketball, tinkering in the garage, camping, fishing, photography, mechanics and bringing Christmas magic to the Salt Lake Valley. He loved the Utah Jazz and BYU sports. He was a very active member in the Church of Jesus Christ of Latter-Day Saints. He served in many callings and found great joy in serving others. Dennis made his living in construction where he specialized in concrete testing as an inspector. He worked at Spec Testing, Consolidated Engineering, Monroc and owned his own business, Independent Testing. He worked on many projects around the State of Utah. Dennis frequently reminded us where his projects were located because he was proud of the work he did. In the winter and summer months, he worked at Park West where he used his CDL as a driver. Dennis loved being surrounded by family and friends. He enjoyed making people laugh with his quick-wit and humorous perspective. While Dennis thoroughly loved his daughters, his greatest joy came from his grandchildren. He spent hours and hours playing with his grandchildren and tending to their needs. He was the greatest grandpa and will always be our hero!! He was proceeded in death by his daughter Amy, his grandson Drew, his brother Owen and his parents. He is survived by his wife Cheryl of 50 years, his 4 daughters Stacie (Carter) Lake, Laurie (Coman) Nail, Carrie (Derek) Parker, Haylie (Andy) Lloyd and his 9 grandchildren, who he loved dearly. Also survived by his sister, Lois, and many nieces and nephews. We as a family are devastated we can not honor Dennis in the way he deserves to be honored. A proper funeral service is not possible due to the COVID-19 virus. A small graveside service will be held for family only. Please leave your condolences at www.serenityfhs.com Interment at Memorial Redwood Cemetery.

On Wednesday, March 18, 2020, Dennis Quinn Cooper, loving husband, father, grandfather, brother, uncle and friend passed away at the age of 70 after a long battle due to the complications of a stroke. Dennis was born on April 20, 1949 in Salt... View Obituary & Service Information

The family of Dennis Quinn Cooper created this Life Tributes page to make it easy to share your memories.