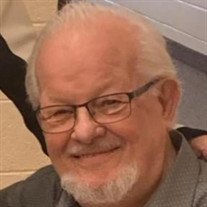 For those that can't make it out this Saturday, please follow this link to attend the Funeral Service with us virtually. https://us02web.zoom.us/j/84982012094 Dennis (Tony) LaVoy Egbert was born in Idaho Falls, Idaho on April 1st, 1937. He returned to his heavenly father on March 14th 2021 after a short and courageous battle with liver cancer surrounded by his family. He was 83 years old. Dennis was the fourth child born to Zera “Zeke” Egbert and Louise Howard Egbert. He was born in Idaho Falls, Idaho, although at the time the family lived in Marysville, Idaho. His siblings were Zee J, LaRee, Zeralene, Brent, and Trenna. His older sister, LaRee, died at age 2 before Dennis was born. His early growing-up years were spent in Marysville. Dennis grew up on the Egbert potato farm in Ashton, Idaho. Chores came first on the farm, and he loved working long hours on the land with his father and brothers. He and his brother Brent received State Vocational Future Farmers of America awards. He and Brent were inseparable! They went everywhere together and most of the time caused trouble wherever they went. They both attended North Fremont High School in Ashton where they played football and were team chess champions. He served an LDS Church Mission to Little Rock, Arkansas that covered the central states at the time. After his mission he attended Ricks College in Rexburg, Idaho for a year where he was introduced to karate and helped teach karate classes. After Ricks College he attended Barber School in Salt Lake City, Utah where he met the love of his life Marie. They met in early September 1961 and the courtship was very short as he asked her to marry him on her birthday on September 30th. They married 9 months later in the Salt Lake City LDS temple on June 22nd 1962 after he finished Barber school. He spent the next 53 years running his own Barber shop until he retired in 2015. Marie got her barber license as well and worked with Dennis for several years. He and his wife spent a lot of time in their early years hunting, fishing, ballroom dancing, and competed in a bowling league. They taught their kids how to hunt, fish, and bowl as well. Later in life he took up photography and entered many of his pictures in State Fair competitions and won several awards for them. His wife was right by his side helping haul his equipment to wherever he wanted to go. He sometimes would just take off on his own and drive to the canyons and take unbelievable photos. He has many of his pictures framed and hung up at the house and gave them as gifts to family members. If there was a new and improved lens or filter, he wanted it! His love for photography poured over to his children and grandchildren. He taught them all the intricate details of taking a good picture. His family would like to thank Encompass Hospice and their nurses for making the transition to better life possible for Dennis. His entire family loved him dearly and enjoyed every last minute spent with him laughing, cracking jokes, watching westerns, martial arts and horror movies, Utah Jazz games, and golf. Dennis is survived by his wife Marie Egbert, sister Trenna, Daughter Wendy (Kent), son Todd (Breezy), and son Troy (Karen), Grand children Cayla, Tyler, TJ, Hunter, Jackson, Justin, Joel, Kassie, Brayden, great grandchildren, Julian, Kaysen, Hadlie, Tinsley, Kaylee, Alexis, and Britnie. Funeral services will be held at 11:00 a.m. on Saturday, March 20th, at the Sandy, Utah Hillcrest 4th Ward 8735 South Harvard Park Dr, Sandy, UT 84094. The family will receive friends Saturday March 20th from 10:00 a.m. to 11:00 a.m. Interment will be in the Memorial Lake Hills Mortuary and Cemetery 10055 South State Street, Sandy, Utah 84070 under the direction of Serenity Funeral Home.

For those that can't make it out this Saturday, please follow this link to attend the Funeral Service with us virtually. https://us02web.zoom.us/j/84982012094 Dennis (Tony) LaVoy Egbert was born in Idaho Falls, Idaho on April... View Obituary & Service Information

The family of Dennis LaVoy Egbert created this Life Tributes page to make it easy to share your memories.

For those that can&#39;t make it out this Saturday, please follow...