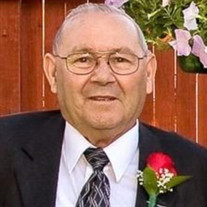 Derek Saville Adams Born in Scarborough, Yorkshire, England on September 3, 1931 To Arthur and Vera Adams. Derek married Margaret Rose Wardle September 26, 1951. Later Sealed in the London England Temple. Returned to his Heavenly Father at 9:58pm on July 16, 2021. Derek was a convert to the Church of Jesus Christ of Latter Day Saints. Exercising their faith, he and Margaret left everything behind in England to come to America to more freely serve the Lord. Their journey was made possible because of their loving Sponsors Jim and Ariel Davis, because Derek was an electrician, Ariel gave him a job in his factory in Salt Lake City. Many others aided in helping them settle in America. Derek served willingly & faithfully as a Branch President in England. Since moving to America, he continued to serve the Lord. His favored callings were in Missionary Work. Serving many times as a ward and stake missionary. His last calling at the age of 88 was ward Sunday School President. He loved to watch sports and in his younger days played soccer. His example of faith and love will always be remembered by his large posterity. He will be missed by his wife, Margaret, also his 9 children, Paul, (Jean) Stephen, (Kris) Graham (April) Kaye (Kevin) John, Carolyn, (Phil) Eugene,(Marie) Tina, (Paul) JoLene (Aaron) 62 grand children, 80 great grandchildren and 4 great great grandchildren, also special inlaws. A viewing will take place on Monday, July 26th, from 9:00am to 10:30am at the Oquirrh 3rd Ward, 6673 Clernates Dr, West Jordan, UT. Graveside Services will begin at 11:00am at the Redwood Memorial Cemetery, 6500 S Redwood Rd, West Jordan, UT.

The family of Derek Saville Adams created this Life Tributes page to make it easy to share your memories.