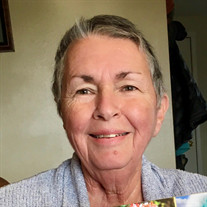 Diane Austin, 71 of Ogden, Utah, passed away on May 7, 2019 after a long courageous battle with a brain infection. Diane was born in Boise, Idaho on October 6, 1947 to Harold and Margie Byard. Diane has a brother; Larry (wife Sandy) Byard of Caldwell, Idaho. She attended Boise schools and graduated from Borah High School in 1965. She was a member of the marching band where she played the flute, piccolo and cymbals. Diane married her high school sweet heart Douglas W. Austin in 1967, from which they have two children. Through the years she developed a love for crafting and was proficient at flower arrangements and cake decorating. At one point she and her friend owned a craft shop in Council, Idaho and had a solo craft shop venture in Escalante, UT. Diane was a self-taught artist and painted wonderful still-life scenes. She harvested things from their garden and canned them. She was skilled in crocheting, knitting and cross stitching and made exquisite pieces. Through the years she became a wonderful cook and prepared many home-made recipes she loved to make for her family and friends. Doug worked for the U.S. Forest Service which took them to many wonderful places throughout the West, landing in Ogden where they retired. Diane and Doug have two sons Darin (wife Krista) Austin of Boise, ID and Daniel Austin of Vancouver, WA. They have four grandchildren, Brooke and Courtney of Boise, and Connor and Quinn of Vancouver, WA. Their grandchildren are the absolute joy of their life, spending as much time with them as possible. Diane enjoyed life and with Doug spent time traveling to their cabin at Paddy Flat, Idaho and properties they owned in New Mexico, Arizona and Oklahoma. Diane especially loved being at Paddy Flat where she could relax and enjoy the solitude of forest living. She loved to travel and went to Japan and then again to Spain with her late mother (Margie Byard) and her late mother-in-law (Geneva Austin). She and Doug traveled with their sons and families cruising through the Panama Canal and Caribbean and also throughout Alaska. Doug and Diane also enjoyed several vacations to Hawaii. In 2010 Diane and Doug spent two weeks in New Zealand RV’ing in a caravan with other adventurous travelers. They loved to take their personal RV on the road and enjoyed camping and crabbing along the Oregon coast. They spent several winters in Amado, Arizona with friends staying in their RV there. Diane was preceded in death by her parents, Harold and Margie Byard and her father-in-law and mother-in-law Clifford and Geneva Austin. Diane is survived by her husband Doug and younger brother Larry and his wife Sandy. She is also survived by her children and grandchildren and her brothers and sisters-in-law Dave and Judy Mathis of McCall, ID; Russ and Alice Stanley of Boise, ID and Mike and Linda Austin of Boise, ID and all her nieces and nephews. Diane will be buried at the Idaho State Veteran's Cemetery in Boise, Idaho on Thursda, May 16, 2019 as a benefit to Doug's veteran status in the U.S. Air Force. A Celebration-of-Life gathering will be held on May 25, 2019 at 2:00pm at Mike and Linda Austin's personal residence. Please contact Mike & Linda Austin at 208-362-1101 for directions to their residence.

Diane Austin, 71 of Ogden, Utah, passed away on May 7, 2019 after a long courageous battle with a brain infection. Diane was born in Boise, Idaho on October 6, 1947 to Harold and Margie Byard. Diane has a brother; Larry (wife Sandy) Byard... View Obituary & Service Information

The family of Diane Austin created this Life Tributes page to make it easy to share your memories.