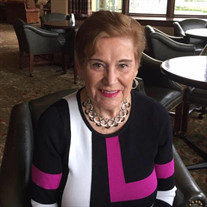 Diane Louise Nicholson Morrison 1930-2020 Our dear mother, grandmother, and great-grandmother, Diane Morrison, passed away peacefully at home during the early hours of June 30, 2020, due to the effects of age. Di, as she was known all her life, was born January 28, 1930 to Lee K. and Helen Nicholson in Salt Lake City, Utah. She attended local schools before graduating from East High. While attending the University of Utah, she was introduced to Bob Morrison, a member of her brother Keith’s fraternity. Romance soon blossomed and after her university graduation, they were married September 14, 1951. Bob and Di made a wonderful couple. The Holladay home they created for their four children was idyllic—truly a “Leave It To Beaver” upbringing. How grateful we are for their loving but firm guidance. Dad and Mom both worked in the family tire business until the day they welcomed their oldest child, after which Di was a devoted full-time Mom. We had dinner together every night, raised several litters of Brittany Spaniels, and explored the canyons, fields and streams of Sleepy Hollow. After her children were raised, she returned to the business until it was sold in 2002. Thereafter they traveled the world with friends. Usually the trip didn’t count unless it included golf. Bob and Di were avid lifetime golfers. They were founding members of the Willow Creek Country Club in the 1950’s (our membership number was 10). She also enjoyed tennis. Di’s laugh was infectious. She enjoyed people. While maybe not always the life of the party, no party was complete without her. She played bridge with her favorites every week up through her 90th birthday. She loved her decades-long association with Kappa Kappa Gamma. She was preceded in death by her parents, brother and husband. She is survived by her children Craig (Jennifer), Sandy, Utah; Richard (Barbara), Ellicott City, Maryland; Holly Cunningham (Smith), Mesquite, Nevada; and Michael, White Bear Lake, Minnesota. She was beloved of her grandchildren Kiley, Lindsey, Brooke, Brittany, Randy, Meagan, Jason, Spencer, Carly, Amanda, Keith, Madison and Lexie. Her 16 great-grandchildren loved to visit. There will be a private family service. A celebration of life will be announced when it is safe for all to assemble.

Diane Louise Nicholson Morrison 1930-2020 Our dear mother, grandmother, and great-grandmother, Diane Morrison, passed away peacefully at home during the early hours of June 30, 2020, due to the effects of age. Di, as she was known all her... View Obituary & Service Information

The family of Diane Louise Nicholson Morrison created this Life Tributes page to make it easy to share your memories.