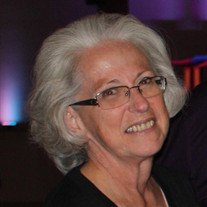 Our beloved Wife, Mother, Nana, and friend passed away peacefully at home on Saturday, April 20, 2019 of natural causes. A Granger girl, Diane Elizabeth Illsley was born in Salt Lake City, UT, May 12, 1959 to Charles Frederick Oswald and Bessie Bowett Illsley. She married her eternal companion Randall Darin Peterson on March 7, 1981, and was the mother to four children: Brittainy, Nicholas, Ian and Tyler. Diane graduated from Granger High School in 1977. She attended the University of Utah and was an avid Utes fan. Besides being a proud mother, she was proudest to be the Nana of 10 grandchildren. Diane was a member of The Church of Jesus Christ of Latter Day Saints, and was happiest serving in the Primary. She was proud of her British heritage which was expressed by her Royal Doulton collection and her loyalty to her home team, Manchester United FC. She proudly flew the Union Jack every year on The Queen’s birthday. She is survived by her husband Randall, her children Brittainy (Brandon), Nicholas, and Tyler (Janessa), and her grandchildren Ian, Audra, Neville, Charlotte, Gemma, Caroline, Callie, Xander, Jadis, and Lilliana. Diane was proceeded in death by her parents, her brother Charles, and her son Ian. Funeral services will be held on Saturday, April 27, 2019 at 1:00 PM at The Country Park 1st Ward in the building located at 11251 S. 2700 W. South Jordan, UT. Family and Friends are invited to visit with the family from 11:30 AM-12:45 PM. Funeral services provided by Serenity Funeral Home 12278 S. Lone Peak Pkwy Draper, UT.

The family of Diane Elizabeth Illsley Peterson created this Life Tributes page to make it easy to share your memories.

Our beloved Wife, Mother, Nana, and friend passed away peacefully...