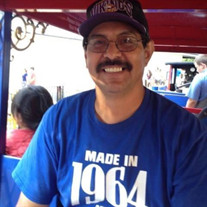 Dick Anthony Garcia, Dick was 55 years old and lived in Kearns, Utah. He passed away unexpectedly at his home from Heart failure. Dick was Born May 17, 1964 in Monte Vista, Colorado. To Telesforo and Esther Garcia. Dick enjoyed hunting, fishing and camping. He loved puzzles and watching Jeopardy as a pastime. Dick was gifted as a small engine Mechanic, if it wasn't running he would get it running again. He loved the Minnesota Vikings and football in general, he also loved golfing. His real passion was taking care of his Mom and Dad, spending time with his girlfriend Maria, and the loves of his life his two boys. They were his best friends. He is survived by his two sons Anthony Carter and Eli Richard Garcia, his father Telesforo Garcia. His siblings Christine (Tony) Garcia, Tally (Judy) Garcia, Michelle (Adolfo) Flores, Ralph (Jordan), Juanita (Mike) Renteria, Jeanene (Larry) Buhler, and many nieces and nephews He was preceded in death by his Mother Esther Garcia, brothers Kenneth, Larry and Billy, Sister Connie, Nephews Amos and Alejandro. “Watch You When You Go” by Dick A. Garcia It ain't the way you walk, it's the way you stand. It ain't how you fly, it's the way you land. It ain't how you talk, it's the way you say. It ain't what you buy, it's how you pay. “And there's one thing I think you should know” They say you can look, but don't you touch. They say you can talk, but don't say too much. They say you can touch, oh' but don't you taste. I say, if that's true baby well then that's such a waste. Oh, but there's one thing I think you should know, I hate it when you leave me but “I LOVETO WATCH YOU WHEN YOU GO” Viewing information March 18, 2020 (Serenity Funeral Home) 12278 Lone Peak Pkwy #103) 11-12 Family and friends may come pay their respects. Due to recent health concerns in the community and State of Utah we ask that you pay your respects, and ask to kindly limit your time so others may come in and pay their respects. We can only have a certain number of people in the building and we don't want to take that time away from others. Celebration of Life March 20, 2020 Dinner 6 pm (Please be mindful of your health) 4511 West 5540 South Kearns, Utah

Dick Anthony Garcia, Dick was 55 years old and lived in Kearns, Utah. He passed away unexpectedly at his home from Heart failure. Dick was Born May 17, 1964 in Monte Vista, Colorado. To Telesforo and Esther Garcia. Dick enjoyed hunting,... View Obituary & Service Information

The family of Dick Anthony Garcia created this Life Tributes page to make it easy to share your memories.