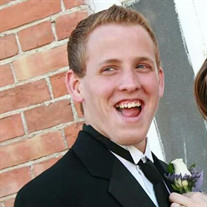 DILLON NATHANIEL BALLARD, born January 10, 1994, in Lancaster, California, was the son of Heidi Marie Ballard and Ricki Vanamann. Dillon was a miracle baby having survived his mother's chemo therapy which she had received for leukemia before she knew she was pregnant. He was born about two months premature and weighed barely five pounds. He spent a few weeks in the neonatal unit before going home. He was a sweet and easy-to-take-care-of infant. At the age of five, his mother passed away after a battle with leukemia. Grandma Joyce became Dillon, Ryan, and Brittany's guardian and moved from Lancaster to Burbank, California. In 2002 they moved to Orem, Utah, where Great Grandma Goldie came to live with them also. Dillon loved being a Boy Scout, playing basketball on a Junior Jazz team. He also liked swimming, skateboarding, and playing video games. Dillon spent a few years in foster care with the Butler Family and graduated from Landmark High School in 2012. He also graduated from the MATC Certified Nursing Assistant program. Earlier this year Dillon and Skye Witham became the parents of a beautiful baby boy, Brayden Nathaniel Ballard. Dillon died November 5, 2014, in Orem, Utah. He is survived by his son, Brayden Nathaniel Ballard, grandmother, Joyce Wheeler, sister, Stephanie Ballard, and her son Chase, brother, Ryan Ballard, and sister, Brittany Ballard; also his uncle and aunt, Chris and Rebecca Burton and their six children, Chloe, Annalise, Zachary, Olivia, Ella and Asher. Dillion will be interred in the Oakwood Memorial Park in Chatsworth, California next to his mother. His cheerful smile and compassion for others will be greatly missed.

DILLON NATHANIEL BALLARD, born January 10, 1994, in Lancaster, California, was the son of Heidi Marie Ballard and Ricki Vanamann. Dillon was a miracle baby having survived his mother's chemo therapy which she had received for leukemia before... View Obituary & Service Information

The family of Dillon Nathaniel Ballard created this Life Tributes page to make it easy to share your memories.