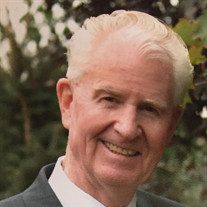 DON DEWEY MAXFIELD: 02/20/1931 – 04/09/2015 On a cold winter day on February 20th, 1931 in Emery, Utah a bouncy baby boy with red hair was born to Carlos and LaVera Maxfield. Don moved to Ferron, Utah when he was 6 years old where he learned to work on the family farm, gardening, milking cows and herding sheep. Throughout his 84 years this work ethic never diminished. Don was the senior class president at South Emery High School. He was a multi-talented man. He played a mean harmonica, played the saxophone in his college jazz band and had a beautiful tenor voice. After moving to Salt Lake City to continue his education at the University of Utah, Don met the love of his life and future wife Carole. After being drafted, Corporal Don D Maxfield left his fiancé Carole to serve in the Armed Forces of the United States from Feb. 19th, 1952 to Feb. 18th 1954. Upon return he finished school, married Carole and was soon after was hired by the FAA as an electrical engineer. Don was also a master builder. He could wire, plumb, repair, remodel and fix anything and was always ready, willing and able to help others. Don was the kind of person we should all strive to be. Don was a faithful member of the Church of Jesus Christ of Latter Day Saints. He served in many callings including Bishop, High Councilor and was the executive secretary for the Salt Lake Central Stake. One of his favorite callings was being able to serve a mission at the Winter Quarters in Omaha, NE with Carole, his forever companion. Don was a true example of compassion, honesty, integrity, passion, hard work and unconditional love. He will be greatly missed. He was a devoted husband to Carole, a loving Father to Terry (Michelle), Scott (Jodi), Kelli (Brent) Hintze and Shawn. The best Grandfather to Devin (Jade), Tanner (Kadi), Chase, Reese, Aaron (Lindsay), McCall (Nicholas) Enterline, Dustin (Noel), Chantel (TJ) Henderson, Madison (Eddie) Waldvogel, Hadley (Cameron) Alvey and Bradley and the greatest Great grandfather to Baines, Bixby, Dylan, Claire, Davis, Buster, Mack, Evan, Sadie, Elizabeth, Payton and Ryker. Also survived by his sister Verna Larsen, brother Chan (Naomi) and brother Dahl (Jaque). Funeral services will be held at 11am Wed April 15 at the LDS Eleventh ward 951 E 100 S SLC, UT. with viewing prior at 9:30am. There will also be a viewing the night before from 6-8pm. Please share your Memories of Don at www.donmaxfield.info.

The family of Don Dewey Maxfield created this Life Tributes page to make it easy to share your memories.