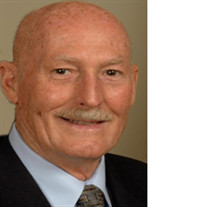 I remember standing in line at the store behind my husband, he was holding a dozen roses. When he got up to the cashier’s counter, he realized that the cashier looked sad. He smiled and said, “I’m buying 11 of these roses for my wife.” And then he handed the cashier the 12th rose. She smiled from ear to ear. That’s Don, the love of my life, my soul mate and my best friend. When I married Don, he was a package deal 7 wonderful children, of course I was a package deal also 5 wonderful children. A “Yours, Mine and Ours” made for movies, except the only “ours” is a tea cup puddle. He was a USA Naval Officer, serving as a Fighter Jet Pilot and later as a Navigator aboard an Aircraft Carrier. Don has an MBA in Finance and Accounting and taught business courses at several universities. He retired from several Fortune 100 companies, Ford being one of them – guess what we drive? Don leaves a legacy of love and integrity with his family and those who knew him. He has left behind wonderful memories of a loving husband, grandfather, and father. We are grateful for each and every day we got to see his glowing smile, and for the lessons learned and all the jokes we shared. I had the opportunity and rare privilege of being the wife and partner of a wonderful, loving, kind man. He was the love of my life, the one who did everything humanly possible for me, he was the one who understood the true meaning of our marriage. His life taught me unconditional love. I am grateful that I had the opportunity to share his dreams, hopes, love, friendship and much more. He was a man of the people. A man who stood by his family throughout. A man who was a hero to all who knew him. A man who loved unconditionally. A man who believed in sharing and caring. A man who put a smile on people’s faces. A man who was so full of life. A man who was a bigger star in his own right than most of us. He will always be in my heart and the love I have for him will never ever die. Donald Floyd Fredley, our dearly beloved husband, father, grandfather, and friend, passed away on Monday, February 8, 2021 in Herriman, Utah after a long, valiant battle with heart failure. Don was born on January 6, 1938 in Chicago, Illinois to Lloyd Arthur Fredley and Lucille Beulah (Bellamy) Fredley. Don was raised in Hammond, Indiana with his four brothers: Lloyd, Steve, Dave, and Dan. While in high school, Don was a member of the swim team and earned various awards including Indiana State Champion Swimmer his junior year (1955). He also lifeguarded on Lake Michigan from 1953-1955. Don had a beautiful tenor voice which he developed in high school. He earned many First-Place awards at state competitions. Don continued to share his musical talent throughout his life, performing in church and at various musical venues. He loved watching and listening to opera and classical music. Don graduated from Hammond High School in 1956. He enlisted in the Navy in April 1956 and proudly served until 1962. Don attended and graduated from the University of Illinois in 1962 with a Bachelor’s Degree in Economics. He later received his MBA from Governor’s State University in 1976. Don worked for various corporations including Ford Motor Company, Chicago-Northwestern Railroad, the Association of American Railroads, and International Harvester. He also taught economics classes at Northwestern University. Don and his wife together, completed a service mission for the LDS church Welfare Department. Don is survived by his wife, Valarie; his brother Dave (Diana); his seven children from his first marriage to Vivian Nogle Fredley: Donald (Susan), Michael (Shadia), Tara, Jana Floyd (Ron), Steven (Melissa), Kristin McGlohn (Travis), and Tricia; 20 grandchildren, and 4 great grandchildren. He also leaves behind 5 stepchildren: Randi Rigby (Brant), Paula Nielson-Williams, Trevor Nielson (Nicole), Matt Fairchild (Megan), and Trevor Nielson (Quincy) along with 10 grandchildren and 9 great grandchildren through his wife, Valarie. Don was preceded in death by his parents, Lloyd and Lucille Fredley, and his brothers Lloyd, Steve, and Dan. A memorial service will be held on July 16th, 2021 at the Summit Ridge Ward, 14550 South Juniper Crest, Herriman, Utah. Visitation from 10-10:50 am; Funeral Service at 11:00 am. Don will be laid to rest at the Utah Veterans Cemetery and Memorial Park at Camp Williams in Bluffdale, Utah.

I remember standing in line at the store behind my husband, he was holding a dozen roses. When he got up to the cashier&#8217;s counter, he realized that the cashier looked sad. He smiled and said, &#8220;I&#8217;m buying 11 of these roses... View Obituary & Service Information

The family of Donald Floyd Fredley created this Life Tributes page to make it easy to share your memories.

I remember standing in line at the store behind my husband, he...