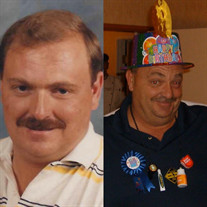 Donald Kay Morrison passed away suddenly on March 20,2020 at his home in Mesquite, NV from a heart attack at the age of 59. Don was born on September 22, 1960 to Flo Marie Easterbrook and Kay Donald Morrison. Don was finally in a good place... View Obituary & Service Information

The family of Donald Kay Morrison created this Life Tributes page to make it easy to share your memories.