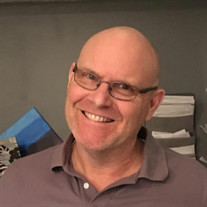 Donald Holman Stidd, Sr. age 59, was born May 17, 1960 in Lynwood, California to Donald Frederick and Geraldine Holman Stidd. He was the third child and only son, the baby brother to Kim and Holly. Don’s father passed away when he was 9 days old, and he gained a stepfather, Robert Sambrano, at age 13. He spent a lot of his young years with his grandparents- Fritz and Marie Stidd in Compton, California. At age 3, he moved with his mother and sisters to Lakewood, California where he lived until adulthood. According to his sisters, he ran the block by bullying the neighborhood kids. Don was quite a handful and had some crazy adventures, but he loved his family and friends and would do anything for them. He started his job at THUMS in Long Beach in January 1981 where he worked for 24 years and made lifelong friends. He met J’Aime Knight in February 1981. They married on October 17, 1981 and Don not only gained a wife, but also a son, Jason Eugene Knight, who he later adopted. In April 1982, another son, Donald Holman Stidd, Jr. was born. Followed by a daughter, Lacey Marie Stidd in January 1985. Don moved his family from the home they made in Norwalk, California to La Mirada, California in 1989. He and J’Aime became foster parents that year and began taking in infants who needed love. In 1992, Kristopher Michael and Katie Michelle became a part of the Stidd family. In 1994, Don moved his family to Delta, Utah. He commuted back and forth to Long Beach while he continued to work for THUMS. In 2004, Don became a grandpa to Kobi Barnson. She lit up his world and she loved her Grandpa dearly. Don left THUMS and started a career with BP America in January of 2005. He worked in Wamsutter, Wyoming, throughout Texas and Oklahoma, and ended on the North Slope in Alaska. He loved Alaska but did not go fishing nearly as much as he would have liked. In 2011, he had another granddaughter, Serella Stidd. Followed by three grandsons in 2012: Corbin Stidd, Jonah Stidd, and Knox Barnson. Another grandson was born in 2014, Weston Stidd, and another granddaughter, Charlotte Stidd, in 2016. Family vacations were frequent and chaotic but he loved spending time with his grandkids. Don left BP in 2017 and started his own consulting company. He worked with Nine Points Energy in North Dakota until he became ill and went home to his daughter’s to heal. Don’s health issues arrived in August 2018. He stayed positive and strong through it all, but things declined rapidly in April 2019. He had another granddaughter, Azalea Stidd, in May 2019, 2 days before his 59th birthday. Don spent some time in the hospital in July and desperately wanted to go home to be with his family. He missed his grandkids and wanted to be with them. Don left this world on August 4, 2019. He was able to spend time with his children and grandchildren in his last days, for which he was very thankful. The pearly gates were wide open to receive this amazing man. Heaven is lucky to have him. He is survived by his mother: Geraldine Holman Stidd Sambrano, J’Aime Knight Stidd, his children: Jason Stidd, Donald Stidd, Jr. (Andrea), Lacey Barnson (Kyler), Kristopher Stidd, and Katie Stidd, his grandchildren: Kobi and Knox Barnson, Serella, Jonah, and Azalea Stidd, and Corbin, Weston, and Charlotte Stidd, and his sisters: Kimberly Eaton and Holly Seeley. He is preceded in death by his father: Donald Frederick Stidd, his grandparents: Fritz and Marie Stidd and Noble Ray and Anna Holman, and his stepfather: Robert Sambrano. Services were held on August 10, 2019 in Sandy, Utah.

Donald Holman Stidd, Sr. age 59, was born May 17, 1960 in Lynwood, California to Donald Frederick and Geraldine Holman Stidd. He was the third child and only son, the baby brother to Kim and Holly. Don&#8217;s father passed away when he was... View Obituary & Service Information

The family of Donald Holman Stidd Sr created this Life Tributes page to make it easy to share your memories.