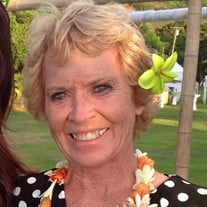 Doris Pyne Barney, returned to her Heavenly Father on October 31st, 2017, in Boise Idaho. She was born on March 22nd, 1943 in Orem Utah to Harold D. Pyne and Hazel Minor Pyne. She married her high school sweetheart M. Jack Barney in Orem Utah on April 20th, 1961. Doris and Jack had three daughters Shauna, Stacy and Stephanie. They lived in Utah County for many years then later moved to Issaquah Washington. Jack and Doris later divorced and Doris returned to Utah with her girls and eventually landed in American Fork Utah where she lived the last part of her life until she could no longer be on her own. Doris worked hard all her life and she taught her girls to work hard too. She lived her life with compassion, determination, strength, and independence. She served in many church callings for the Church of Jesus Christ of Latter-Day Saints; she taught Gospel Doctrine and served in the Mt. Timpangos Temple before her illness made it impossible for her to do so. She loved her family, her three girls were the light of her life and she enjoyed spending time with them and their families. She especially loved babies, whenever a new grandchild or great-grandchild came into her life she made sure she was there to help her daughters or granddaughters, but mostly to love her newest grandbaby. She served her family her whole life and was an example to all her knew her. She did hard things for most of her life, but living with Frontal Lobe Dementia would be the one thing she couldn’t defeat or work hard enough to overcome. Her daughters were honored to serve her during these, the hardest years of her life. They kept traditions for as long as they could, special girl’s trips every year around her birthday, weekly dinners, and taking turns spending holidays together. She will be greatly missed, but her example of strength, determination and love will never be forgotten. Doris is survived by her three daughters, Shauna (Scott) Seastrand of Las Vegas, NV, Stacy (Jeff) Burr of Henderson NV, and Stephanie (Denny) Mann of Boise, ID. 10 grandchildren, 6 step grandchildren, and 29 great-grandchildren. Her sister RaNae Healy of Spokane, WA, and her brother Dale (Jeannie) Pyne of West Virginia. Doris was preceded in death by her parents Hazel M. Roberts, Harold D. Pyne, and M. Jack Barney. Services will be held on Saturday, November 11th, 2017 at 11 a.m., with a viewing prior to funeral services at 10:00 a.m. at Doris’s old chapel – 320 North 100 East, American Fork, UT. Thank you to all who served Doris with all the love and compassion of the Savior. Special thanks to Charlotte Peterson who did so much to help our mom during those difficult years she was still living in American Fork and for the many visits she and her family made to see Doris while she was living in Las Vegas. Thanks to Emerson House in Boise Idaho, for the care and love they showed to our mom during her last days of life. Last but not least, to all friends and family that visited and kept Doris in their prayers.

The family of Doris Pyne Barney created this Life Tributes page to make it easy to share your memories.

Doris Pyne Barney, returned to her Heavenly Father on October...