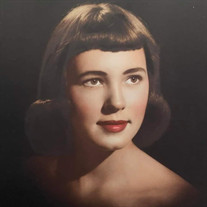 Dorothy was born October 6, 1938 in Provo, Utah. After years of persistent ailments, she passed away January 29, 2022 at home in West Jordan, Utah while lovingly and peacefully surrounded by her family. As the matriarch of the family her love and presence are of unspeakable loss. With comforting love, the family takes peace knowing she is relieved of the pain her body endured. She grew up in Provo, Utah and graduated from Provo High School. She met her husband Jerry and moved to White City "Sandy UT." with him. There she started her family having four children who were her love and world. She provided her children with the best upbringing. She raised them with love, affection, education and consistency while she also worked many jobs with newspapers, community action, political action and eventually an insurance agent. She exemplified great strength and grace in every phase of her life. She possessed a remarkably kind and generous spirit and embodied a wonderfully compassionate, charitable and positive approach to life. She hosted neighbors for socials, including her sister Nancy Shelton and best friend Gay Mills, who all lived just houses away. After her children were raised and out of the nest, she found herself starting over meeting the love of her life Art Canney. With him she embarked on love of family, friends, socializing and travel. She found love for life in the warmth of southern Arizona, enjoying the ability to have the best of all worlds with children, grandchildren, great grandchildren and worked at her own pace to travel with the man she loved for many years. Unfortunately, health reasons took her love and slowed her down. Moving back to Utah, she moved in with her children where she was able to be closer to her family. "Mothers hold their children’s hands for a short while, but their hearts forever". Preceded in death by her parents Verl & June Brown, husband Arthur Canney, ex-husband Jerry Byergo, sister Helen McDermott, son in laws Richard Bagley and Roger Simmons, grandchildren Brenda Fry and Jeremiah Darling. Survived by her sister Nancy Shelton. Daughters Debbie (Roger) Simmons, Stephanie (Tom) Fry, Julie (Richard) Bagley, son Devere (Angela) Byergo. Grandchildren, David (Andrea) Darling, Daniel (Rachelle) Darling, Jayme Mackay, Ashley Blanchard, Zachary (Taylor) Barker, Brittani (Grant) Delaney, Jessica Byergo. Great grandchildren, Adante Darling, Dylan and Brooklyn Mackay, Vanessa and Valerie Scarborough, Tavin and Tajia Peck, Kolton Delaney, Jackson and Christopher. Great great granddaughter Phoebe Barker.

Dorothy was born October 6, 1938 in Provo, Utah. After years of persistent ailments, she passed away January 29, 2022 at home in West Jordan, Utah while lovingly and peacefully surrounded by her family. As the matriarch of the family her love... View Obituary & Service Information

The family of Dorothy Ann Brown Byergo created this Life Tributes page to make it easy to share your memories.