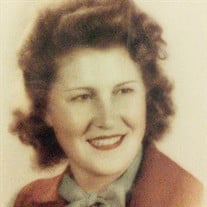 Dorothy Mae Hanson, age 90, passed away on December 15, 2015 in Taylorsville, Utah following a short bout with illness. Her family was by her side. She was born as Dorothy Mae Grossnicklaus on September 22, 1925 in Niles, Oklahoma to Charley Godfried Grossnicklaus and Goldie Ann Hoselton. Dorothy married three times during her long life. At the tender age of 19 she married John Raymond Warman Jr., and together they had one son. Following their divorce she married Perry Lee Battenfield, from her home state of Oklahoma, before a justice of the peace in 1955 at St. George, Utah. Unfortunately, Dorothy found herself alone once again when Perry died leaving her a widow with two young children to raise. She then met and married Gordon Victor Hanson who was stationed at Fort Richardson with the US Army in Anchorage, Alaska where she was living in 1970. Growing up during the great Depression and being the oldest of 8 children, Dorothy learned the need for and value of hard work. She enjoyed a wide variety of occupations during her sojourn here in this life. As a young adult, during WW 2, Dorothy contributed to the country's war efforts in both San Fransisco, California and Oklahoma City, Oklahoma. Dorothy worked many years in the grocery business and was voted president of a union when she worked at Fort Sill Oklahoma in her later years. She also tried her hand at several businesses, from the Nearly New Shoppe she ran in Alaska to Shaklee and home decor. She was truly a woman with many interests and abilities. Dorothy became acquainted with The Church of Jesus Christ of Latter-Day Saints while living in Cheyenne, Wyoming with her second husband but did not get baptized until years later. As a member she enjoyed doing genealogy, quilting and food storage. Temple attendance helped Dorothy strive to be the best wife and mother she knew how to be. Dorothy is survived by her children: John Raymond (Barbara) Warman III, Wendy Lee (Kevin) Battenfield Priddy and Andrew Philip Hoss (Lynda) Battenfield, she was the grandmother of 6 grandchildren and great-grandmother of 9 great grandchildren. She also has three surviving siblings: LaVesta, Caroline and Corky. Dorothy was preceded in death by her parents, husbands Perry and Vic and siblings Fred, Frank, Arnold, Charlene.

Dorothy Mae Hanson, age 90, passed away on December 15, 2015 in Taylorsville, Utah following a short bout with illness. Her family was by her side. She was born as Dorothy Mae Grossnicklaus on September 22, 1925 in Niles, Oklahoma to Charley... View Obituary & Service Information

The family of Dorothy Mae Hanson created this Life Tributes page to make it easy to share your memories.