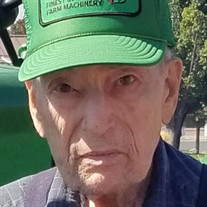 Douglas Joseph Krattley, 1926 – 2021 Douglas Joseph Krattley, 94, passed away at his home on July 27, 2021, in Riverton, Utah. He was born September 20, 1926 in Stillwater, Minnesota to Fabian Sebastian Krattley and Alice Marie Montbriand. He married Joan Marie Smith on March 10, 1952 in Stillwater, Minnesota. At age 4, Douglas moved with his parents and brother to a farm outside of Somerset, Wisconsin, which is still in the family. He was drafted into the United States Army in 1944, where he served in the Pacific during World War II and was part of the Army of Occupation in Japan. After returning home he continued to work on the family farm before buying his grandparents’ 500-acre farm, located on what is now called Krattley Lane in North Hudson, Wisconsin. Douglas and his wife Joan operated the farm, planting hay and oats, managing a herd of dairy cows, and boarding horses. After developing severe allergies that prevented him from continuing to farm, Douglas and Joan moved to Tulsa, Oklahoma and Doug attended the Spartan College of Aeronautics and Technology, becoming a licensed jet aircraft mechanic. In 1967, he started working for Western Airlines in Minneapolis-St. Paul, commuting from his home in Burkhardt, Wisconsin. In 1982, Western Airlines moved their hub and transferred their employees across the country. Douglas and his family moved to Salt Lake City, Utah, but continued to maintain their home in Burkhardt and part of the family farm in Somerset. Later Western Airlines merged with Delta Airlines, and he retired in 1993. Douglas loved bluegrass music since he was young, and played musical instruments every day, including the guitar, banjo, mandolin, fiddle, harmonica, and the autoharp. He compiled an extensive library of sheet music, records, and CDs. After retirement, he taught himself how to read Egyptian hieroglyphs, studied philosophy and religion, closely followed current politics, and was an avid reader. Doug always had a love for the outdoors, from hunting and fishing when he was young, and cross-country skiing. His happy place was maintaining the large yard at his home in Riverton, Utah. He spent many hours putting together an irrigation system up until shortly before his death. An avid Green Bay Packers fan since 1939, Doug rarely missed watching a game and was a dedicated “Packer Backer” his entire life. Douglas is survived by his wife Joan, sons Douglas, Jr. and Joseph, and daughter Karri, all of Riverton, Utah; brother Barney (Mary) Krattley of Somerset, Wisconsin; cousin David (Dyan) Montbriand of New Richmond, Wisconsin; numerous nieces and nephews; and close family friend Don Hastings of Pleasant Grove, Utah. His faithful Maine Coon cat, Oglethorpe, stayed with him until the end, finding and alerting family members during Doug’s first fall in the middle of the night. He is preceded in death by his parents; his brothers, Robert, Thomas, and Roger Krattley; mother-in-law Vivian (Burton) Smith Titel, and father-in-law John D. Smith. Per his request, no services will be held. Interment will be in Wisconsin at a later date. The family wish to thank Jaimee, Kristine, and Maria of Moniker Hospice Care for their care of our father in his last days, allowing him to stay in his home with his family and beloved pets.

The family of Douglas Joseph Krattley created this Life Tributes page to make it easy to share your memories.