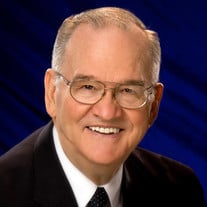 Douglas Colton Perry, 83, was born Dec 1, 1934, in Provo, UT, the oldest child of Rolland and Miriam Perry. He died at his Provo home of causes incident to age, surrounded by loved ones, on July 7, 2018. He married the love of his life, Janice Kapp of Vale, Oregon, on Sept 24, 1958 in the Logan Temple. Doug lettered in track and swimming at Logan High School, and he learned to play every brass instrument, talents which led to athletic and musical scholarships at both USU and BYU. He served in the French Mission from 1955-57, then met Jan at BYU on the first day of classes. He enlisted in the Army Security Agency, studied Russian intensively at the Army Language School in Monterey, CA for a year, then served for 15 months as a Russian Cryptographer in Japan. Doug graduated from BYU in 1964 with a BA in Russian and teaching minors in French and Music. Graduate school at Indiana University followed as he pursued a PhD in Slavic Linguistics. He maintained a life-long love of languages and studied his scriptures in ten languages almost to the end of his life. In 1968 Doug left graduate school as his interests changed from natural languages to new digital ones. He worked as a systems analyst/programmer for the Navy, Westinghouse, USU, the LDS Church's Management Systems Corp., and IRECO Chemicals. The last 38 years were spent typesetting music for Jan and their music business, and they traveled to almost every state and many foreign countries giving hundreds of firesides. Doug and Jan served in the Chile Santiago West Mission, and later as service missionaries in a Spanish-speaking ward in Provo. Doug also served as a Stake Missionary, Branch President, Military Group Leader, YM president, Elders Quorum President, Seventies Group Leader, Stake Clerk and Bishop in the BYU 12th Stake, High Councilor, and Provo Temple Baptistry worker. He was a dedicated home teacher. Doug is survived by his wife and children Steve (Johanne), Robb (Kim), Lynne (Brad Christofferson), and John; grandchildren Jessica, Sarah, Rachel, Emily, Nate, Jason, Melissa, Jake, Rebecca, Alex, Matt, Ben, and Kate; great-grandchildren, Ava, Nixon, Asher, Everly, Boston, River, Hudson, Luke and Daniel; his siblings David (Frances), Kathleen (Dennis Schade), and Diane (Gary Kapp); and many foster kids and their families who became a large part of his life, in particular Mark and Tammy Miner and their son Ammon, and Ge-Yao Liu, who came back to be present for Doug’s last few days. Doug was preceded in death by his son, Richard Scott, and his parents, all of whom we are sure eagerly welcomed him home. Funeral services will be held Sat. July 14th at 11:00 a.m. in the Provo Rock Canyon Chapel located at 2445 North 650 East (Timpview Dr). A viewing for friends and family will be on Fri. July 13th from 6:00-8:00 p.m. at the same Rock Canyon Chapel, and again on Sat. morning from 9:30-10:30 a.m. just prior to the funeral. Interment will be at the Provo City Cemetery. Please share memories and condolences at www.serenityfhs.com.

Douglas Colton Perry, 83, was born Dec 1, 1934, in Provo, UT, the oldest child of Rolland and Miriam Perry. He died at his Provo home of causes incident to age, surrounded by loved ones, on July 7, 2018. He married the love of his life, Janice... View Obituary & Service Information

The family of Douglas Colton Perry created this Life Tributes page to make it easy to share your memories.