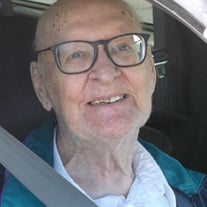 Earlan Carroll Braley, husband of the late Virginia Nielsen Braley, passed away on Sunday, December 3, 2017, in Lehi, Utah, at the age of 85. Dad was born on January 9, 1932, in Mapleton, Maine to Floyd Herbert and Edith Charlotte Akeley Braley. He grew up in Mapleton and graduated from Mapleton High School in 1949. After graduation he attended Aroostook School of Commerce in Presque Isle, Maine. He enlisted in the United States Air Force and served from 1952 to 1956. After the service, he moved to San Diego, California where he would eventually join the Church of Jesus Christ of Latter-day Saints. It was there that he met and fell in love with his wife Virginia Nielsen. They were married on May 3, 1963, in the Los Angeles Temple. While living in the San Diego area, they had two daughters, Jolynn and Janell. They later moved to Hayward and then to Union City where their four sons, Jerrod, Kalen, Kurtis, and Kordel were born. The Braleys made Union City their home for 33 years where they made many lifelong friends. In 2001, Mom and Dad moved to Liberty Lake, Washington, and eventually to Spanish Fork, Utah in 2006. Dad’s life-long career with the California Department of Transportation (CalTrans) began in 1962 as a survey field technician in southern California. In 1966 he was transferred to the San Francisco Bay Area where he worked as a materials inspector until retiring from CalTrans in 1995. Dad was a dedicated member of the Church of Jesus Christ of Latter-day Saints. He served faithfully in several church callings including a church service mission with Mom for the California Oakland Mission from 1999 to 2001. Dad loved sports, especially baseball and basketball, both of which he played in high school and on military teams, as well as on church teams well into his 50s and 60s. Dad’s other great passion was travelling around the country by RV. He took the family on numerous road trips to visit family back east, visiting countless church history and other historical sites along the way. His love of family history and temple work meant many visits to old graveyards to find ancestors’ names. As grandchildren came along, Dad and Mom loved to spend time with them. Dad loved hugs, wrestling, cuddling babies, playing games, and whipping up interesting concoctions in the kitchen. Dad is survived by his six children: Jolynn (Jay Clegg), Janell (Troy Adamson), Jerrod, Kalen (Paula), Kurtis (Jenni), and Kordel (Heather); 19 grandchildren: Emily (Brandon Jones), Bryce Johnson, Marissa Clegg, Matthew (Kathryn) Adamson, Holly Clegg, Julianna Braley, Seth Adamson, Hayden Clegg, Tessa Braley, McKay Clegg, Corinne Braley, Ashton Braley, Shane Braley, Capri Braley, Elise Braley, Lyric Braley, Paige Braley, Lawson Braley, and Oliver Braley; three great-grandchildren Britain, Charlotte, and Mica Jones; his three sisters: Nancy (Cohen Renfroe), Necia (Sherman Daigle), and Judy (Bob Wade); and sister-in-law Janet Braley. He is preceded in death by his wife, Virginia Nielsen; his parents (Floyd and Edith Braley); his brother Norris; and two brother-in-laws: Cohen Renfroe and Bob Wade. Viewing and Funeral Services will be held at the LDS chapel at 1470 East 130 North, Spanish Fork, Utah. The viewing will be held Thursday, December 7, from 6:00 to 8:00 pm. Funeral Services will be held on Friday, December 8, at 10:00 a.m., with a viewing at 9:00 a.m. Interment will occur after the services at the Spanish Fork Cemetery. In lieu of flowers, the family asks that donations be made to the LDS Temple Patron Assistance Fund (http://www.ldsphilanthropies.org/temple/funds/temple-patrons-fund.html). We wish to thank the staff at Harmony Hills Assisted Living Center for their dedicated service to Dad.

Earlan Carroll Braley, husband of the late Virginia Nielsen Braley, passed away on Sunday, December 3, 2017, in Lehi, Utah, at the age of 85. Dad was born on January 9, 1932, in Mapleton, Maine to Floyd Herbert and Edith Charlotte Akeley Braley.... View Obituary & Service Information

The family of Earlan Carroll Braley created this Life Tributes page to make it easy to share your memories.