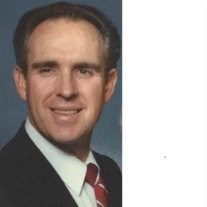 Edward Arthur Elsberry was born on October 27th, 1937 in Pembine Wisconsin. After graduating from high school in Marshaltown Iowa, Ed joined the Air Force where he was introduced to a technical education that blessed his professional career and the second gift was a new faith. Ed was introduced to the missionaries while he was in the Air Force and quickly joined “the Church of Jesus Christ of Latter Day Saints”. He shared his faith with his family and friends and continued the missionary spirit for the rest of his life. Abundant energy has also been a part of Ed his whole life. He could out work and out last almost anyone and do it with grace and without complaint. He could work tedious stubborn problems for hours on end with focus and excitement and find satisfaction on the resolution of the issue. He always explained that the impossible takes a little longer. Cool under pressure has been a hallmark of Ed’s personality and has been a blessing to him both personally and professionally. As a result, Ed has had an outstanding professional career that has taken him on a journey around the world. In 20 years he completed 132 national or international expeditions for the National Center of Atmospheric Research (NCAR) in Boulder Colorado . There he designed instruments, and installed and managed weather data. He drove the tops of the Rocky Mountains in the winter in a huge Snow Cat. He was a storm chaser through the plain states gathering enough data for several doctoral candidates to complete their degrees. Tornados are classed as ‘F”. The F stands for the scientist he worked with Ted Fagita. He also worked throughout the equatorial trough, Central America, the far east, the Philipeans , islands in the pacific, Alaska and places still unknown. He then started a new satellite receiver company known as ISSI (International Satellite Systems Inc.). Satellite technology was in its infancy. He successfully installed the first satellite feed for the Manhattan Cable Company at 23rd and Lexington, in New York for all the boroughs. Hi company, ISSI, brought the first satellite feed to India for the Indian Summer Olympics. There he installed Indira Gandhi’s first color television at her home while guarded by Seiks with machine guns. He was affectionately known by Ministers of the Indian government as “Mr. Eddy”. No matter where he went or who he met, he left a lasting impression of goodness, kindness, competence, and friendship. Ed then shifted professional gears, as the satellite industry was consolidating, and put his energies into aerospace, where he ran a number of successful rocket systems programs for Orbital Sciences. He had top clearance from the U.S. Department of Defense so he could provide leadership for international projects. His organizational strengths were known in his industry and Ed distinguished himself as one of the great project leaders at Orbital Sciences. Ed has always been a man of faith and expressed his beliefs through his service. Ed or Brother Elsberry will always be known for his selflessness as he has touched the lives of countless people. His genuine concern for others and his cheerful countenance has endeared him to everyone that he met. His passion and excitement for sharing an idea or a story was nothing short of infectious. His presence lifted us all and brought out the best in all of us. Grandpa, Brother Elsberry, Mechanic, Storm Chaser, President Elsberry, Engineer, Entrepreneur, Husband, Sweetest Man, Friend and just regular old Dad. He left a legacy of decency and goodness and we will miss him dearly as family patriarch and counselor. Ed Elsberry is survived by his wife RitaRae Hall Elsberry and his children Ken Elsberry, wife Susan; Kevin Elsberry his wife Inna and children Britteny, Kiley, Blake and Artium; His daughter Shari and her daughters Peyton and Page; Ed's son David Ellsberry. His step children are W. Donovan Hall and his wife Val and children Jeremy, Kahnon, Shimara and Mason; Dan Hall; Marci Hall and her children, Liberty Ann Chandonia and Gabriel Chandonia; Randy Hall; Craig Hall; Mitch Hall; Phillip Hall and his wife Iryna and their children Faith, Phillip J. and Summer Rae.

Edward Arthur Elsberry was born on October 27th, 1937 in Pembine Wisconsin. After graduating from high school in Marshaltown Iowa, Ed joined the Air Force where he was introduced to a technical education that blessed his professional career... View Obituary & Service Information

The family of Edward Arthur Elsberry created this Life Tributes page to make it easy to share your memories.

Edward Arthur Elsberry was born on October 27th, 1937 in Pembine...