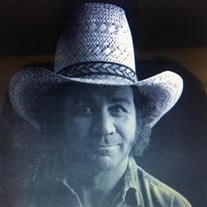 Edward H. Parker – Age 77 Ed Parker passed away peacefully on March 29, 2019 in Sandy, Utah. He was born April 14, 1941 in Midvale, Utah to Edward H. and Lottie Ray Parker. He married Claudia Loveridge in Elko, NV. Edward lived his entire 77 years in Midvale. Ed was good with his hands and could fix almost anything. He was most helpful to his family trying to repair anything they had go awry … all it would cost was a hug and a six-pack of Bud. Ed liked to fish, hunt, and gamble. Ed was especially fond of camping trips with family and friends. He was always recognizable by the cowboy hat he wore. Ed is survived by son Edward (Karen) Parker; grandchildren Amanda Jo (Parker) Chorn, Charles Birch, Charlene Birch, Shy Ann Mitchell, Edward Parker, Landon Parker, Jerimia Parker; 12 great grandchildren; son-in-law Charles Birch; 5 sisters, Mary Ellen Webster, Della Ontiveros, Colleen Parker, Nancy Hatt, and Lynn (Ronn) Romrell; and many nieces and nephews. Preceded in death by his parents, wife, daughter Terrie Birch, sister Gloria Johnson, 3 brothers, Ray ‘Tim’ Parker, Jim Parker, and Lee Parker, and granddaughter Fawn Mitchell. Per Ed’s request, his body was cremated and there will be no formal services. At the end of his life Ed was cared for lovingly by his beloved sister Colleen Parker and other family members. The family wishes to thank Mike Hock for his devoted service in transporting Ed and being a wonderful friend, we wish he met you ten years earlier, too. We want to thank the IHC Home Health and Hospice staff, especially Ed’s nurse Suzy, counselor Natalie, and Chaplain Rebecca for their devoted service and visits to Ed during the last months of his life. Please share memories and condolences at www.serenityfhs.com.

The family of Edward Hyrum Parker created this Life Tributes page to make it easy to share your memories.

Ed Parker passed away peacefully on...