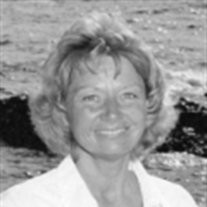 March 25, 1953 - May 20, 2013 South Jordan, Utah-Elayne Carter returned to the loving arms of her Savior Jesus Christ on May 20, 2013, after a long and valiant battle with cancer. Born Elayne Carter Foil in Norfolk, VA on 3/25/1953 to Charles and Aldwyth Foil, she graduated high school at Washougal High School in Washington State. Elayne loved life. She had many hobbies including beading, stained glass, crocheting and embroidery, just a few of the many ways she expressed her natural creativity. After marrying Ronald O. Parker in Salt Lake City on 10/29/71 they began a life of travel via the U.S. Army with their two daughters. This began Elayne's life long interest in travel and new experiences. Ron and Elayne were later solemnized in the Jordan River Temple. Elayne excelled at her career with the U.S. Forest Service in the Office of Personnel Management for the Wasatch-Cache National Forest. Her favorite time of year was "Fire Season" when she would travel to remote fires and work in the camps of the firefighters. Her love of travel, scuba diving and being with her family continued up to the end of her life, she never let her debilitating condition slow her down. Elayne was a member of the Church of Jesus Christ of Latter Day Saints. She was a recent convert and was a faithful visiting teacher to her sisters at Silver Pines Retirement Community. We are grateful for Hearts of Hospice and especially Elayne's angel Scott Jackson, R.N. Elayne's daughters would like to give a special thanks to Elayne's niece, Jennifer Mauss and sister, Vickie Wallace for their selfless service and love. Elayne is survived by her two daughters -Vicky Lee Staley (Donald) and Brooke Renee Ostberg (Steve). Her grandchildren, Brianna, Sarah, Haley and Nathaniel. Siblings, Vickie Wallace (Brent), Charles (Skip) Foil, Wendy Burke and Veldon Foil (Brenda) as well as many nieces and nephews. Also survived by her loyal companion, Tiki, who protected, defended and comforted her during her last years of life. We will all miss her great spirit. Not one to sit around, we are sure she is already busy on the other side of the veil, finding something to work on. She is preceded in death by her sweet grandson, Alex Michael (Scooter) Savage, husband Ronald O. Parker, Veldon Jean Foil Jr. nephew, as well as her parents Aldwyth and Charles Herman Foil. Services to be held at 11:00 am Tuesday, May 28, 2013 at the LDS chapel at 10885 Pampas Dr. Sandy, UT. A viewing will be held prior to the service from 9:30 am to 10:45 am. Funeral services to be provided by SereniCare of Draper, UT. Interment will be held at 1:00 pm at the Provo City Cemetery.

The family of Elayne Carter created this Life Tributes page to make it easy to share your memories.