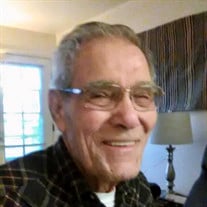 > Elbert Keith Sanford, 90, passed from multiple health issues on Thursday, October 21 with his children by his side. He was born and raised in Sutherland Utah on his family’s farm to Hyrum Elbert and Florice May Wixom Sanford, a twin to sister Katherine, a younger brother to sister Janet and eventually an older brother to Phyllis. He graduated from Delta High School in 1949 and soon after joined the Air Force. He served honorably in the Korean conflict and was always proud of his service. After his discharge he met and married Shanna Lea Fletcher and became a father to her young son Russell. They had two children together David and Lee Ann. They resided in Davis county and his home on Center street was renowned for beautiful flowers and an enviable yard. He joined Mountain Bell as a cable spicer working there 32 years until his retirement. After retirement he and Shanna moved to Montana for a brief time but soon returned to live in Sunset, until Shanna passed in 2018, when he moved to Sandy to live closer to his daughter. He enjoyed fishing, the outdoors, western movies, the ideals of a simple life and a good cup of coffee. Keith remained in good spirits and was known for being a kind and humorous man even when his health began to fail him. > Keith is preceded in death by his wife Shanna, his son Russel Kearl, his sisters Katherine and Janet and his parents. He is survived by his daughter-in-law Louise, son David (Christy) and his daughter Lee Ann (Stephanie). He will be missed by the many “buddies” at his living facility and health service workers both at the facility and the dialysis center he attended. > Keith will be interred at the Utah Veterans Cemetery and Memorial Park in Bluffdale, Utah. There will be no services at this time.

> Elbert Keith Sanford, 90, passed from multiple health issues on Thursday, October 21 with his children by his side. He was born and raised in Sutherland Utah on his family&#8217;s farm to Hyrum Elbert and Florice May Wixom Sanford, a twin... View Obituary & Service Information

The family of Elbert Keith Sanford created this Life Tributes page to make it easy to share your memories.